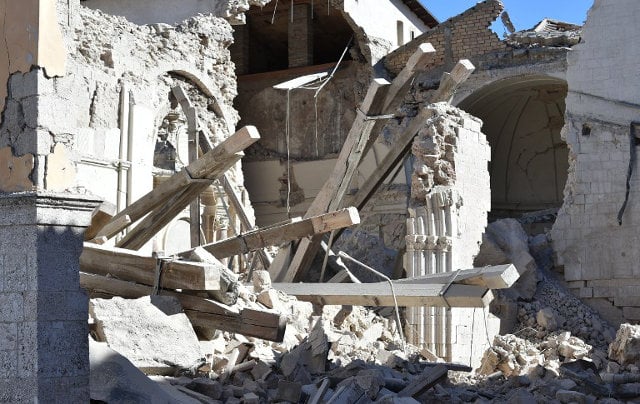 The basilica of Norcia destroyed in the tremors. Photo: Alberto Pizzoli/AFP

In August, 297 people were killed and hundreds hurt after a powerful quake struck mountain villages in a remote area of central Italy, with the devastated town of Amatrice the worst-hit.

Several more were hurt in October as two further earthquakes rattled Italy, the most powerful registering a magnitude of 6.1.

The pope listened carefully to the stories of a local man and a priest before declaring that “the wounds will heal but scars will remain.”

“I am proud of the priests who did not abandon their lands, pastors who did not flee when they saw the wolf,” said the pontiff, speaking off the cuff.

“Only hope can rebuild,” said the pope.

Recounting nights spent in cars or tents in the open air, one priest from the affected zone told the pope: “We lost our homes but we became a big family.”

The pope was due on Sunday to baptize eight newborns from Amatrice in the Sistine Chapel.

In October, he had surprised residents with a visit, praying alone amid the rubble and encouraging survivors.