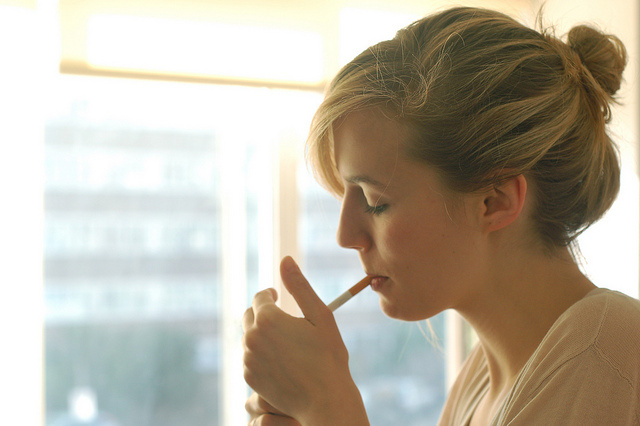 Austria has one of the highest rates of smoking among teenagers and young adults in Europe, with 52 percent of men aged 18 to 28 smoking, and 34 percent of women.

Only Greeks, Bulgarians and Latvians smoke more than Austrians, according to a 2012 Eurobarometer study.

Austria is one of the last countries to allow smoking from the age of 16. Karmasin told the Austria Press Agency that she has already been in talks with Austria’s provincial governors on changing the law as part of the Youth Protection Act.

A survey by the Organisation for Economic Co-operation and Development (OECD) found that 27 percent of Austrian 15-year-olds smoke at least once a week, more frequently than any other children in the OECD area – something Karmasin said was “unacceptable”.

She said that a ban on smoking for under-18s would send an important signal, although she didn’t elaborate on what the consequences would be for those who break the law.

Austria is one of the countries in western Europe where cigarettes are cheapest. The country has a deeply entrenched smoking culture, and a general ban on smoking in cafes and restaurants doesn’t come into force until May 2018.  Meanwhile, there is a ban on vaping products for people under 18.

Karmasin tried to bring in a smoking ban for under-18s two years ago, but it was shot down by Vice Chancellor and ÖVP head Reinhold Mitterlehner. He said such a measure was “not necessary”. However, Karmasin is optimistic that she can get the backing for a ban this year, and said that the “health argument” trumps all others.

How Spain plans to get people to stop smoking. Photo: Khalil MAZRAAWI / AFP

For many outsiders, Spain is a nation of smokers.

The stats from Spain’s Ministry of Health show that 23.3 percent of men smoke every day in Spain, compared with 16.4 percent of women.

For both males and females, the highest number of smokers are aged between 25 and 34, meaning that it’s the younger population who are smoking slightly more than the older generations.

Spain’s pulmonologists are now pushing for the country’s tobacco laws to be tightened, claiming that reform is needed after the last legislation was approved a decade ago.

Why is smoking such a problem in Spain and what is being done about it?

The latest stats from the Spanish Ministry of Health show that lung cancer, often caused by smoking, is the third most frequently diagnosed cancer in Spain, with 29,549 cases diagnosed so far in 2021.

Given these high figures Spain’s Spanish Society of Pulmonology and Thoracic Surgery (SEPAR) has proposed five measures to help get people to stop smoking.

SEPAR points out that every time anti-smoking legislation is reformed and things for smokers made more difficult, the prevalence of smoking decreases. Smoking on terraces was banned in some regions during the pandemic. Photo: CRISTINA QUICLER / AFP

The first point on their list is to raise the price of tobacco, which must cover all forms, from cigarettes to cigars, through to rolling tobacco, and electronic cigarettes.

This first measure may soon become a reality as the Spanish government has already predicted that the price of tobacco will rise in 2022, after several years of stagnation.

It is expected that tobacco will be responsible for almost a third of all special taxes received in 2022, equating to €21.8 billion.

According to the World Health Organization (WHO), “cheap tobacco” in Spain guarantees “a percentage of smokers above 30 percent”.

According to Dr. Carlos A. Jiménez Ruiz, pulmonologist and president of the society, the current anti-smoking law has “some deficiencies” that need to be addressed in order to develop legislation that is more effective and efficient, especially with regard to the prevention of tobacco consumption in young people, but also in helping smokers to stop smoking and in protecting the health of non-smokers.

READ ALSO – Maps: Which beaches in Spain have banned smoking?

Besides increasing the cost of tobacco SEPAR proposes four other measures to get Spain to quit smoking. These include:

How does Spain compare with other European countries when it comes to smoking?

The latest European survey from 2020 shows that 42 percent of Greeks claim to be smokers, which is only slightly above Spain.

On the other side, the European countries with the lowest number of smokers are mainly Nordic countries, such as Sweden, Finland, Iceland and Norway.