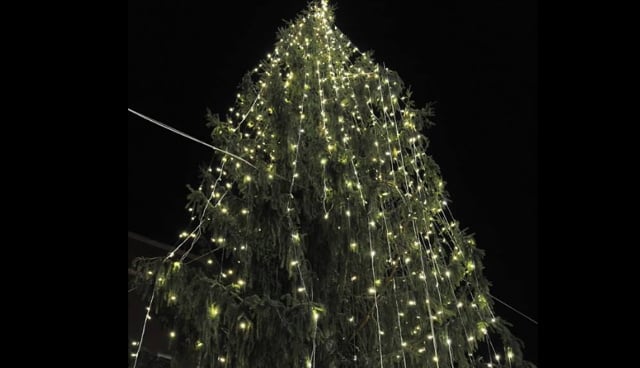 The tree in all its glory... Photo: Comune di Roma/Facebook

A picture of the threadbare tree, which stands in the central Piazza Venezia, was posted to Facebook by city authorities and has received over a thousand comments – but mostly for the wrong reasons.

“It would have been better not to have anything at all, it's so ugly!” the top-rated comment, by Gianandrea Traversi, says. “And they wonder why tourists choose other cities.”

“It's just like the rest of the city – full of holes and covered in rubbish,” another resident grumbled.

The tree had its lights switched on by mayor Virginia Raggi on Thusrday, the Feast Day of the Immaculate Conception which for many Italians marks the start of the festive season.

She called on children to count down from ten to zero, saying that at the end of the countdown, “the tree and Via del Corso will be magically illumated” – however, when the moment came, the flickering lights were met with silence.

The bare-looking fir is bereft of any other decorations and doesn't even have a star or angel at the top.

One Roman said that in comparison to other European cities, which create a Christmassy atmosphere with lights, shows and fun, in Rome there is only “infinite sadness.”

The video below compares the threadbare tree to its grander counterparts in other major cities – from Milan's sparkling tree, put together by jeweller Pandora and covered in 50,000 lights, to a towering golden specimen in Salerno.

It was posted on the Facebook page Roma fa schifo (Rome is disgusting), which documents incidents of littering, vandalism and other problems in the capital.

One commenter labelled Rome's conifer the 'albero dell'austerity' (the Austerity Tree) while another said it made them “vomit”.

Some leapt to the tragic tree's defence, arguing that it was hypocritical to criticize the budget tree and also complain about Christmas becoming commercialized or city authorities spending tax money on frivolous expenses. Both the controversial fir and its lights were donated.

But others argued that cutting costs didn't have to mean losing the festive magic.

“Doing something cheaply doesn't have to mean doing it badly. I saw [the tree] today in real life: it's ugly and sad,” said one disappointed local. “It looks like it's been hit by a hurricane.”

The saddest Xmas tree in Rome “Even in war-torn Iraq they have a better tree!” #XmessFail

Elsewhere in Italy, towns and villages have really got into the festive spirit – take a tour of the best Christmas decorations across the country here.

IN PICTURES: Italy lights up for Christmas