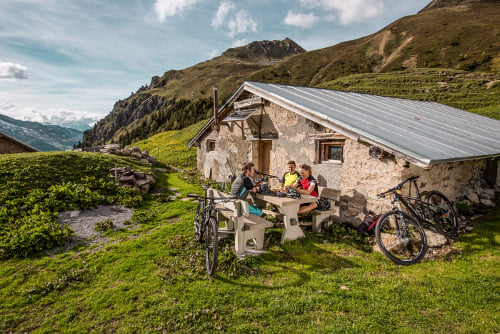 Switzerland is well known as a place where rules are important, but it’s also quite big on personal liberties… as long as you follow the rules. As well as learning plain old punctuality in the land of clocks and watches, there are plenty of local customs, habits and codes of conduct you’re likely to pick up when you live here.

Some of these you’re obliged to adopt almost immediately, others are honed over months or years. Here’s our list of habits you’ll embrace – and hopefully even enjoy – when living in Switzerland.

1.    You arrive on time. Not early, not late. And there are no excuses because clocks are everywhere and Swatches are (relatively) cheap.

2.    You catch public transport as standard. And why wouldn’t you when Switzerland has one of the world’s most dense public transport systems, comprising 29,000 kilometres of train, bus and boat lines (plus 90 urban-area systems that incorporate trams, trolleybuses, cable cars and ferries too).

3.    However, because the public transport system is so good, you’ll find yourself tutting, along with other passengers, if your train or tram is even two minutes late.

4.   You no longer notice the church bells, which ring ALL THE TIME.

5.    You’re a pro at sorting your rubbish and recycling into paper, card, cans, bottles, PET, bio/green waste and normal trash. You make weekly trips (on foot) to the recycling stations to drop off bottles and cans. And you don’t blink at paying around 1-2 francs per bag for your city’s official taxed garbage bags.

6.    You always take your shoes off when you go into someone’s house.

7.    You feel safe most of the time. Walking around at night is generally not a problem. You can leave a bag on the other side of the park while you chase after your kids or your dog and fully expect it to be there, untouched, when you return.

8.    As a result, you’ve stopped wondering “Where are the parents?” when you see small groups of five-year-olds walking to kindergarten, clad in their high-vis gear, without an adult in sight. An added bonus is their occasional polite and cheery greeting as they pass you on the street.

9.    You get used to everything working and being clean such as elevators, intercoms and vending machines. If they do break down, a team of workers will show up to do repairs, often within a day. If you notice a mess in a park or public area, you’ve started calling the service number so the local authorities can send someone to tidy it up quicksmart. You’ve even seen the occasional postal worker giving a bit of spit-and-polish to the postboxes on their beat.

10.    You don’t have a flat number. All residents’ names are listed by their doorbells and on their letterbox.

11.    You’ve stopped carrying emergency tissues because there’s always toilet paper in every public loo – even in the most remote mountain cabin.

12.    You’ve become used to a freeform disregard for queueing and merely smile ruefully when yet another Swiss pensioner barges in front of you when trying to make a purchase or board a train.

13.    You actually look forward to the standard selection of Rösti / Cordon Bleu / Bratwurst / Hamburger on offer at every Bergrestaurant / buvette in the land.

14.    Even if there’s only a single customer ahead of you, it will take around 20 minutes to be served in said Bergrestaurant. Meals will be at least CHF20 per head and you won’t bat an eyelid.

16.    That said, there are so many mountains here that people in Switzerland have made it an art form to enjoy them year-round. The list of downhill pursuits you can and will try includes: skiing, snowboarding, snowbiking, sledding, snowshoe hiking, mountain biking, snow tubing, summer tobogganing, mountain scooting, go-karting and more.

Snowtubing — just another way to get down a mountain. Photo: Peter Fuchs/Swiss Tourism

17.    You’ve learnt to deal with heights – suspension bridges, 90-degree funiculars and cable cars floating high over mountains are a part of life.

19.    You accept hiking as a way of life and always have a “Gruezi”, “Bonjour” or “Buongiorno” at the ready when you pass other hikers.

20.    You’re never far from a conversation (we won’t say a moan!) about language with other expats. Whether it’s laughing at yourself attempting the vagaries of Swiss-German, the lack of English comprehension in much of French-speaking Switzerland or discussing the mystique of Romansh.

21.    After a few years, or even months here, you’ll be pleasantly surprised to discover that work / life balance is genuinely A Thing in Switzerland.

22.    You also embrace “wellness” and start regarding spa days as mandatory.

23.    You accept the fact that your Swiss friends and relatives will almost aggressively “not want to bother you” – although sometimes it feels rather like neglect!

24.    You get used to bills arriving after the fact, even for some online shopping. Doctor’s bills can take months or even years to arrive, but they expect prompt payment within four weeks.

25.    You sadly never expect your health insurance to actually pay for anything, despite spending 300 francs a month in premiums.

26.    You get used to travelling back in time when using Swiss websites, a world of comic sans, clunky menus and drop-shadowed wording. However, you’ll find yourself increasingly using these local websites, because online purchases from anywhere outside of Switzerland attract eye-watering import taxes.

27.    You’ve forgotten what it’s like to eat lunch “al desko”. Instead you head out to a local café, restaurant or your workplace canteen to enjoy a sit-down lunch with your colleagues.

28.    You no longer feel faint when paying 20 francs for a lunchtime salad and you’re surprised when visiting friends or relatives quail at being charged 15 francs for a chicken wrap.

29.    You’ve come to see “customer service” as a tricky tango of blame and expectation. Generally, any complaints you may have will require having to accept some measure of responsibility yourself (because the shop assistant sure ain’t saying sorry), before a grudging refund may be offered – if you’re lucky.

31.    You’ve learned to tot up the total when paying multiple bills in the post office so you don’t get told off by the cashier. Plus, you make sure to wrap any parcels ‘neatly’ or risk being denied postage.

32.    You rankle at ‘Nazi Gold’ comments, which seem a lazy insult to Switzerland. As Clare O’Dea summarizes in her book The Naked Swiss: “Seventy years after the Second World War ended, many people still link Switzerland’s war record to the overall character of the nation. Is that fair? The perceived failings of other neutral or occupied European countries, including France, Spain, Sweden or Norway, or of the countries that fought alongside the Nazis, have not caught the public imagination in the English-speaking world in anything like the same way.”

33.    Although you use public transport most of the time, you have a car or Mobility account as well (go figure!). When driving, you expect to put up with aggressive tailgating, narrow mountain lanes, pocket-size parking spots and using the overtaking lane on the motorway for going slightly faster but still roughly at the speed limit.

34.    You won’t hesitate to drive to Germany or France for basic groceries.

35.    You obsessively collect supermarket coupons, two-for-one deals etc and yet still seem to spend a small fortune on groceries. You wait to go shopping to ensure you take advantage of the Migros “jokertag” days.

36.    You no longer jaywalk because you’re never far from a pedestrian crossing. At busier intersections, you always wait for the green man (or risk being severely tutted at).

37.    You’ve stopped laughing at the fact that even small home renovations or a spot of routine garden maintenance seems to require three cranes and a digger.

39.    You do your laundry on the allocated day and/or timeslot so as not to annoy your neighbours, and you start leaving passive-aggressive notes on the machine if someone else dares to do their washing on your day.

40.    You get cross when you hear loud noises during “quiet time” from midday to 1pm, or after 10pm at night.

41.    You’re no longer at all surprised by the cheese and chocolate consumption stats for Switzerland. In fact, you’re contributing to them.

42.     Speaking of chocolate, you’ve quickly learnt that in Switzerland, peppermint flavour is only for toothpaste. So you nip over to France to secretly stock up on mint chocolate, which feels faintly ridiculous.

43.    You know where your local nuclear bunker is (if it’s not in your basement) and have your iodine vials stored safely just in case. You’re even considering storing a few weeks’ worth of canned food – you can’t be too careful! (ok, maybe we’re going too far here, but it’s not without precedent!)

Have you embraced any or all of the above habits? Are there any other quirky local customs we should know about? Let us know in the comments below.

Zurich, Geneva, Basel are all beautiful cities with plenty of offers for their residents, but which would top the list of the best place to live in Switzerland? Turn out, none of them.

A new quality of life study commissioned by the daily newspaper Handelszeitung looked into several criteria to determine the best places in the country. The Gemeinderatings 2022 evaluated 944 municipalities with more than 2,000 inhabitants to make the ranking.

READ ALSO: Health, prices, and safety: Is Switzerland a good country to retire in?

Among the criteria to determine how attractive each area is, they looked into taxation issues, how safe the cities are, how many jobs are available, the quality of the real estate market (both when buying and renting properties) and the level of support for elderly residents.

Additionally, Handelszeitung looked into matters such as the availability of leisure offers, access to public transportation, and sustainability factors as well.

These are the top ten places to live in Switzerland:

The best city, Cham, did exceptionally well in the criteria of taxes (reaching the fifth spot) and real estate (11th in the ranking for this criteria). The neighbouring city of Zug secured second place, followed by Risch, all in the same canton.

Switzerland’s French or Italian-speaking areas have certainly not fared well, and all the country’s top ten cities are in German-speaking cantons. Moreover, Canton Zug gets an impressive number of six towns (and the top 3) in the best 10.

READ ALSO: MAP: The best cantons for business in Switzerland

The first French-speaking city in Switzerland to show up in the ranking comes only in 63rd place: Pregny-Chambésy, in the canton of Geneva. Then, Saint-Sulpice (VD) follows in 69th place, Carouge (GE) in 73rd, and Lutry (VD) in 95th).

Italian-speaking Switzerland does even worse: it only appears in 90th place with Collina d’Oro.