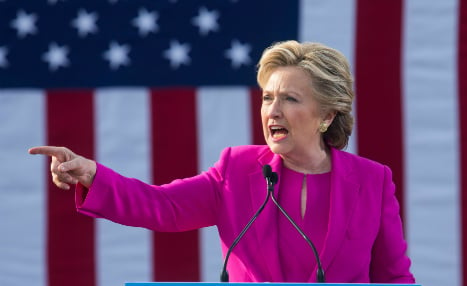 In the latest list of donors published on the Clinton Foundation website, the name of Germany’s Federal Ministry for the Environment (BMU) appears among those which gave between €1 million and $5 million.

The money was donated to the foundation in the third quarter of 2016 – in other words in the decisive months leading up to the November election in which Hillary Clinton was narrowly defeated by Republican Donald Trump.

The Clinton Foundation was created by ex-President Bill Clinton in 2001 after he left office. It works on global projects on climate change, economic development, women’s rights and global health and has raised close to $2 billion since its inception.

Vera Lengsfeld, a citizen's rights activist and former MP for the Christian Democratic Union (CDU), claimed in a blog post that “apparently the German taxpayer has unwittingly been financing the Clinton election campaign.”

Die Welt, which was the first German news outlet to report the donation on Monday, asked rhetorically: “Why should Germany pay for the US election campaign?”

But the German government has categorically denied the accusation that it sought to influence the US election.
Chancellor Angela Merkel's spokesman Steffen Seibert tweeted on Tuesday that “the money was for two projects managed by the International Climate Initiative. The Clinton Foundation was only a project partner.”

The BMU explained to Die Welt that the money was for projects supporting forestry and re-naturalization in East Africa which are carried out by the Clinton Foundation in Kenya and Ethiopia.

“Our experience with the Clinton Foundation has been positive up until this point. Checks on the projects have not led to any objections.”

The BMU also told Deutsche Welle (DW) that the money was part of long-term funding for environmental projects.

“The decision wasn't made during the US election,” a spokesperson said. “We're talking here about projects with a duration of 2014 to 2018. They were approved well before the election, several years before it in fact.”

Hartmut Bäumer, from anti-corruption organization Transparency International, told DW that the Clinton Foundation was at fault for the confusion.

“It's misleading when a payment by a government ministry earmarked for a specific purpose, the financing of a climate protection project, appears in what seems to be a list of donors to a foundation,” Bäumer said.

“In the first instance, that's a problem at the foundation. But in future the Environment Ministry should ensure that payments are correctly listed before releasing funds.”

US media have long criticized the Clinton Foundation for a lack of transparency, although it is generally given good ratings by charity watchdogs.

When the charity first published names of donors in 2008 before Hillary Clinton became Secretary of State, the names of Saudi Arabia and Blackwater Worldwide, a private military company, appeared on the list.

In 2014 the Washington Post reported that there is “substantial overlap between the Clinton political machinery and the foundation”, finding evidence that donors to her election campaign had also regularly donated to the charity.

A contested FBI investigation is currently looking into whether Clinton traded favours and access for donations while she was Secretary of State.

The Swiss foreign ministry also came under scrutiny recently when it was revealed that it donated nearly 500,000 francs to the Clinton Foundation in 2011, when Switzerland and the US were locked in a dispute over tax evasion.