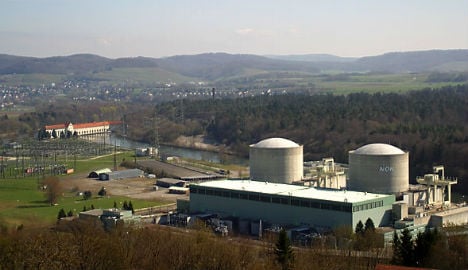 By Roland Zumbühl (Picswiss), Arlesheim (Commons:Picswiss project)
Switzerland has already vowed to do so but a “yes” vote would force three of its five reactors to close next year.
Just a few months after Japan's Fukushima nuclear plant was wrecked in the March 2011 tsunami disaster, Switzerland decided to gradually close its nuclear plants, but without setting a clear timeline.
The government's plan was to decommission Switzerland's five ageing reactors, which today produce around a third of the country's electricity, as they reached the end of their safe operational lifespan.
But all of Switzerland's nuclear plants have open-ended operating licences, meaning they can continue operating as long as they are deemed safe. That was not good enough for Switzerland's Green Party, which five years
ago launched the initiative that comprises Sunday's vote, calling for the reactors to run no longer than 45 years.
Without a clear time limit, “you have to wait until there is a breakdown or an incident before you can close the nuclear plants”, spokesman for the initiative Mathias Schlegel told AFP in an email.
Setting a 45-year cut-off date would help “avoid running them for longer than what is reasonable”.
A “yes” vote would entail the final closure next year of Beznau, which has been operating in the northern Swiss canton of Aargau, near the German border for 47 years.
That plant, which counts two reactors currently undergoing repairs, became the world's oldest functioning commercial nuclear plant after Britain's Oldsbury reactor closed in 2012.
The Muhlberg plant, which opened in Bern canton in 1972 would also need to close next year if the Greens get their way, while Gosgen in Solothurn would shut in 2024 and finally Leibstadt in Aargau would close by 2029.
While the Swiss government supports gradually shutting down the plants, it opposes the initiative, cautioning that it would lead to premature closures.
“The reduction in electricity output could not be compensated quickly enough by electricity generated from renewable sources,” it warned in its policy position. “This would mean that Switzerland would have to import a large amount of electricity in the coming years,” it said, warning that “this would undermine the security of supply and would not make ecological sense, because foreign  electricity is often produced by coal-fired power stations.”
The Swiss parliament also opposes the initiative, as do all the right-leaning parties, while the Greens have the backing of all left-leaning parties.
The Greens also appear to have the backing of the people, but polls show that support has dwindled in recent weeks.
The latest survey, conducted by gfs.bern last week, showed 48 percent of respondents in favour of the initiative, down from 57 percent in a poll last month.
A full 46 percent of respondents in the latest poll said they were opposed to the move, up 10 points from last month's survey.
The initiative's backers argue that with Beznau currently down and Leibstadt also undergoing repairs until early next year, the Swiss will make it through the winter with their nuclear plants at only about 50-percent capacity.
And they insist that the rapid expansion of renewable energy production in Switzerland and in Europe could quickly compensate for the lost production if all the reactors shut.
Switzerland currently gets around 33 percent of its electricity from nuclear, nearly 60 percent from hydraulic power, and just over four percent from renewables like solar and wind, according to official statistics from 2015.
While opponents of the initiative warn that getting out of nuclear too quickly could threaten Switzerland's energy security, those in favour say they hope a “yes” vote could speed up investments in renewable energy.
According to public broadcaster RTS, some 40,000 green energy projects are currently awaiting authorisation, with the potential to double and even triple the current renewable production.
Url copied to clipboard!