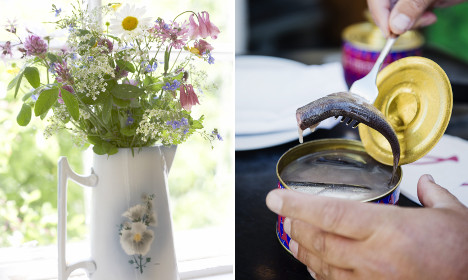 That’s what the poor staff members of a flower shop in Swedish city Karlstad had to contend with on Monday morning, after vandals broke a window, then threw different varieties of stinky Swedish delicacy surströmming into the store during the middle of the previous night.

For those not in the know, surströmming is a centuries-old traditional Swedish food made by fermenting Baltic herring for months on end. Its smell has been likened to “sewage”, a “baby diaper” or a “dead body” in a viral Youtube video, and the odour has even been mistaken for a gas leak in the past.

Despite that, plenty of people in Sweden still eat the odd dish. Here's a picture of Prime Minister Stefan Löfven taking a good sniff during the 'premiere' (the big day the cans are finally cracked open once the fermenting process is over) last August. This man is not believed to be involved in the Karlstad incident. Photo: Susanne Lindholm/TT

With nothing reported stolen from the flower shop in central Karlstad, it seems spreading the funky fishy stench was the main purpose of the attack. Local police have no suspects for the incident.

“There won’t be any unpleasantness or anyone losing their job or the like,” Morgan Connedal of Värmland Police told local newspaper Nya Wermlands-Tidningen.

Hopefully the people who had to clean it up on Monday morning were on the pro-surströmming side of the great divide.