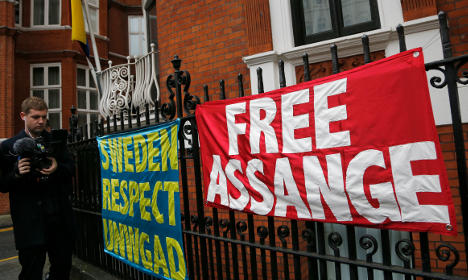 Ecuador's Foreign Minister Guillaume Long was quoted as saying he had sought assurances from Britain and Sweden that Assange would not be extradited if released from his hide-out.

Assange, 45, has been in the embassy since 2012 to avoid being sent to Sweden where he faces rape accusations which he denies.

“If he is really wanted in Sweden in connection with the alleged sex charges, that is all right, but he must not be extradited to a third country,” Long said in an interview published on the news site Ecuadorinmediato.

He said Assange could be sent to Sweden “as long as this is not all a scheme to have him extradited to a third country”.

Assange fears Sweden would extradite him to the United States to answer for the leaking of diplomatic cables by his whistleblowing website, which embarrassed Washington.

An Ecuadoran state attorney questioned Assange at the embassy on Monday and Tuesday on behalf of a Swedish prosecutor who was also present.