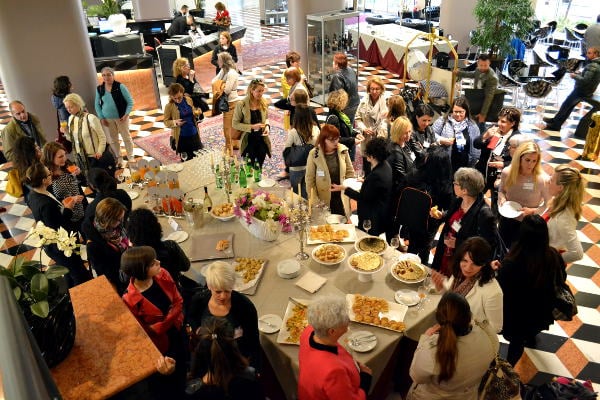 Many women come to Italy seeking personal or professional gratification. But while it may be easy to integrate into Italy’s many fabulous cultural aspects – the food, the wine, the fashion, the beauty of its landscape – some parts of professional life are difficult for women to overcome.

Women may find it challenging to establish and grow a professional career here, especially those who are not located in a major city.

Entrepreneurs often find it tormenting to understand the bureaucracy in setting up shop in Italy, and then find they need guidance to keep their business afloat legally and fiscally. And the task of building up professional relationships, or even a circle of friends, can be daunting.

Italy might be known for its hospitality when it comes to food and eating, but in the professional world, women can be their own worst enemy. Now, women in Italy are finally discovering that the greatest weapon they have at their disposal is each other.

Sector-specific networking groups have popped up as well such as Donne Del Vino (Women of Wine), Donne del Marmo (Women of Marble), and two Veronese women have created a Women in Surgery group. So it may be easier than you think to connect with like-minded individuals who can help you build your career.

Italy has traditionally lagged behind its European (and global) counterparts when it comes to the participation of women in the workforce and equal opportunities. In a country with historic family values and a strong religious presence, women are more likely to be stay-at-home wives than have a career.

According to European Commission statistics from 2015, the percentage of women in the workforce between the ages of 15-64 is still below 50 percent – the lowest level in Europe.

So how do we change this mentality?

The goal of networking groups is to create a network of support among women, who can assist each other in achieving professional and personal objectives. These groups help women – including expats – establish new collaborations and expand their circle of colleagues and friends.

The other goal of many of these groups is to create “gender-balanced leadership” and “unconscious bias”. Some of these networking events attract a small quota of men, which helps change the mentality in the workplace and at home in the Italian culture by opening their eyes to the rescources and skillsets which women bring with them. The professional cultural landscape is also changing in Italy. The younger generation of women is pursuing higher education (as of 2015, the OECD estimated that 55.2 percent of university students were female in Italy), they are career-driven and looking to climb the corporate ladder or start their own businesses.

This younger generation is also driving the entrepreneurial spirit in Italy, with one in ten new startups being driven by the under-35 demographic.

According to La Repubblica, 35 percent of Partita IVA (VAT number) holders are women, and the majority of those opening the P.IVA are younger, around 35 years old.

This changing culture can lead to many challenges for women:
– How can highly educated women who want to stay in Italy find jobs?
– Do women know the process and the rights of opening a Partita IVA?
– How can women form productive and professional collaborations?

Networking has become the “hot topic” for women in Italy to get answers to these pressing questions, allowing women to find professional opportunities, business collaborations and personal connections over a few glasses of wine.

Finding and Launching Networks in Italy

Seeing how networking was on the rise in Italy, but not able to find a group which suited my own needs, I recently created the group Verona Professional Women Networking in Verona, northern Italy.

I started this group on LinkedIn in order to maximize the growing digital presence of professionals, with the goal of creating a network of professional women who can support each other in career development and create a dialogue around diversity, gender equality and work-life balance issues. Since its creation in February 2016, the LinkedIn group has attracted over 970 members and is active on Facebook and MeetUp as well. We organize monthly networking events comprised of an aperitivo networking hour and then an informative session with activities such as roundtables, seminars and training.

If you're ready to start building a network in Italy, think about what kind of network would be best for your needs.

International networks such as PWN and EWMD have a more global and corporate focus, and many events are held in English.

Define your professional and personal objectives first and then search for the networks in your area. Keep in mind most of these networks have annual membership fees and some have selection criteria and a process.

And if you can't find a network in your area or sector, you can always create it yourself!

Use online platforms such as LinkedIn to locate other professionals in your area and organize local meetups. If you are looking to create a non-profit association for your group, it’s as simple as drafting some by-laws with a mission statement and submitting it to the Agenzia delle Entrate.

If you would like to write a guest blog for The Local, get in touch at [email protected]