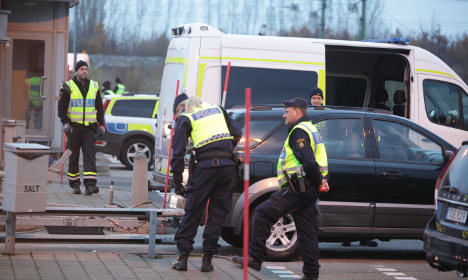 Police officers carrying out border controls on the Malmö side of the Öresund bridge. Photo: Stig-Åke Jönsson/TT

The decision was taken following an extraordinary cabinet meeting, and comes after the European Commission decided that countries in the passport-free Schengen zone should be allowed to extend their temporary controls for a maximum of three months under exceptional circumstances.

Sweden has temporary border controls in place on the Öresund bridge crossing to Denmark, as well as at its ports in Trelleborg, Malmö, Helsingborg and Gothenburg.

They were introduced for six months last autumn in response to the refugee crisis, then extended by a further six months last May. The Nordic country has struggled to cope with the influx of asylum seekers in recent years, and received around 163,000 asylum applications during 2015.

An average of 400,000 people per week pass through Sweden’s borders, of which between 40 and 95 percent are subject to controls. In the period between August and October, 425 people were denied passage as a result of controls.

Today’s decision follows the Swedish government last week confirming that it would extend photo ID checks on buses, trains and ferries into the country for a further three months.

The border controls on the Öresund Bridge in particular as well as photo ID checks have been criticized for causing delays for regular commuters between southern Sweden and the Danish capital Copenhagen.

Interior minister Ygeman said he plans on discussing ways of making life easier for commuters over the Öresund Bridge when he meets Danish colleagues in Brussels next week.

“I understand their frustration and I’m doing all I can to reach an agreement with Denmark,” he told news agency TT.

Ygeman also said he was unable to promise that the controls would be stopped when the new three month extension is over, and that much depends on whether other EU countries begin to live up to the union’s decision to take more asylum seekers.

EU permission must be given for any further lengthening of the controls to take place.