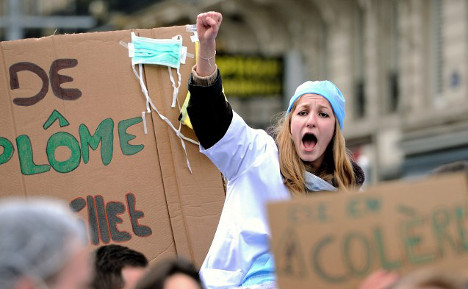 France is renowned worldwide for the quality of its health service, but nurses in France might have something to say about that.

On Tuesday hospital staff held protests across the country including a march from Montparnasse to the Health Ministry in Paris to demonstrate their growing anger at their worsening conditions of work.

Other hospital workers joined the protests.

Various nursing unions were due to hold talks with health minister Marisol Touraine.

She may have difficulty quelling their anger which is focussed in various areas: lack of investment, lack of staff, being overworked, no time for patients.

In September nurses called for action after a wave of suicides that were believed to be related to the stresses of the job.

Union leaders warn of an increasing number of suicide attempts due to burn-out. Staff are off sick as a result of exhaustion and those who retire are not replaced.

To cover the absences some nurses who are specialists in one area of care are asked to cover in another field in which they have no experience.

“You are a nurse in surgery for 15 years and one morning you find yourself dropped into cardiology,” said Nathalie Depoire the president of a national nurses association CNI.

She said this left nurses “feeling stupid” because they “were unable to answer patients' questions”.

Nurses told Le Monde newspaper of having to treat almost twice the number of patients a day as they did five or six years ago.

“All the time I have days when I don’t have time to drink or eat or go to the toilet. Finishing my tasks is a race against the clock,” the nurse told Le Monde.

Unions have called on the government to scrap its planned €3.5 billion of cuts between now and 2017.

Nursing associations also want their salaries re-evaluated to equal the skills and the responsibility they have.

France’s health minister has vowed to come up with a plan to improve the conditions of work by December.