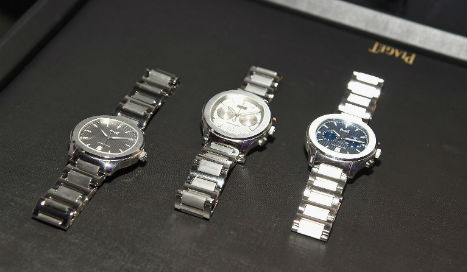 Piaget watches in display in New York in June. Photo: Jamie McCarthy /Getty Images North America/AFP
Sales fell by 13 percent to 5.1 billion euros at the world's second-biggest luxury group, pushing down net profit 51 percent to 540 million euros ($600 million) for the six month period ending in September.
“The decrease reflected the weak demand for watches in general, as well as historically high comparatives and the impact of exceptional inventory buy-backs,” said the group, which includes luxury watchmakers Piaget, IWC,
Vacheron Constantin and Baume & Mercier.
Sales by its specialist watchmakers slowed 17 percent to 1.4 billion euros. The buyback of watches from retailers and changes to the group's retail and wholesale network led the company to book a one-time charge of 259 million euros, which accounted for more than half of the 43 percent drop in operating profit to 798 million euros.
“Concerning watches, we will look to deal with overcapacity issues, adapting manufacturing structures to the level of demand,” group chairman Johann Rupert said in a statement. Group sales plunged 18 percent in Europe.
“France was particularly affected by a significantly lower level of tourist activity,” said Richemont. “The UK, however, enjoyed double digit growth rates in sales following the EU referendum” as the drop in the value of the pound made for some bargains for tourists.
In the Asia-Pacific region, the largest market for the group, the rate of the sales drop halved to 8 percent from 17 percent recorded in the same period last year.
The overall decline, due in large part to buybacks of watches “was partly offset by continuing growth in mainland China and positive retail, jewellery and accessories sales in the region”.
Sales by Richemont's jewellery houses, which includes Cartier and Van Cleef & Arpels, fell by 13 percent, but the group said this was also primarily due to slower watch sales.

A giant screen at the stand of Swiss watchmaker Patek Philippe on the eve of the opening of the 2018 Baselworld watch and jewellery show in March. Photo: AFP

“After a relatively calm March, growth moved ahead strongly in April,” the Federation of the Swiss Watch Industry said, noting exports for the first four months of the year rose 11 percent on the same period of 2017 to 6.7 billion Swiss francs (€5.8 billion, $6.75 billion).

Other key markets also saw large rises, with exports to China and the United States clocking up increases of 11 percent and 12.8 percent respectively.

Europe was a mixed picture with German sales up 12.8 percent but sliding 14.7 percent in Britain, continuing a recent trend as the United Kingdom wrestles with Brexit.

The global picture has been healthier since a difficult period across 2015 and 2016 saw the sector take a hit after China introduced anti-counterfeiting measures, helping knock back sales of luxury goods.

That fallow period began with 2014 sit-in street protests in Hong Kong, dubbed the Umbrella Revolution, which saw a tail-off in visitor numbers from the mainland to the territory where many Chinese do much of their luxury shopping.

Terror attacks in Europe also had an effect on the European market in hitting tourism.

Read also: Six Swiss wedding gifts fit for a prince and his bride