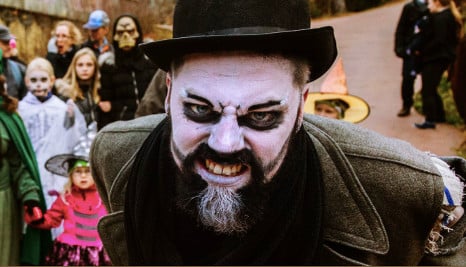 One of the performers at Kolmården's Halloween celebration. Photo: Kolmården Zoo website
Kolmården Zoo, on the Baltic coast near Norrköping, decided to remove clown performances from its Halloween pageant after customers got spooked by the “killer clown” craze which swept Europe in October.
“Our guests got in touch and asked whether we were going to have clowns because their children were afraid… and after that the decision was easy,” Mattias Zingmark, head of marketing, told Sveriges Radio.
Zapp the clown, who was due to play a significant role in the Halloween performance, has been written out of the script and the actor given another role. “As an author I love to solve problems, so that’s exactly what I went and did,” said scriptwriter Kim Andersson.
He said that the Zapp character had now been replaced with a less-threatening mime.
“We have a huge number of artists in [scary] make-up, actors and other extras who will create mystery so it’s obviously a balancing act,” Zingmark said of the changes.
Any clown masks spotted in the zoo would be removed from customers, he added.
“We will take away all scary masks from the park, no matter who is wearing them.”
This is the fifth year running that the Zoo has put on the event, which includes a ghost and zombie safari, a Halloween feast and a Halloween disco. It  began on Wednesday and runs until Sunday night.
The “killer clown” or “creepy clown” craze emerged in the US in the summer and has spread rapidly in Sweden, with several people being injured by the unsettling pranksters. 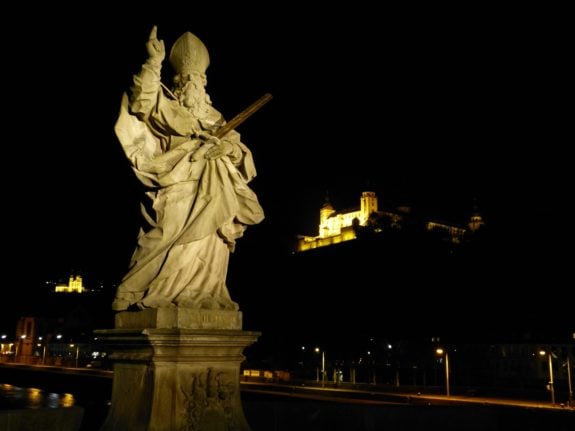 To mark Halloween, we’ve identified five little known haunted places in Germany – and the figures said to haunt them.

The Marienberg fortress looms above the beautiful city of Würzburg like a particularly squat bird of prey. Once the seat of the prince-bishops of the region, it has also played an important role in several major historical events as a demonstration of power.

However, the ghost of the fortress isn’t some stern noble, or soldier – it’s a vengeful nun, accused of witchcraft.

Maria Renata Singer von Mossau was born in 1679, and as a daughter of a lesser noble, became the prioress of the Unter Zell convent, close to the Czech border in Bavaria. Most of her tenure as the prioress was uneventful, even if many of the nuns thought she was a very strict leader.

That all changed in 1746, when one of the nuns began to have fits of convulsions, screaming and meowing like a cat. The phenomenon spread throughout the convent until almost all of the nuns were experiencing similar symptoms.

Maria was then placed under investigation, and searches allegedly turned up occult objects. A series of ‘interviews’ then turned up a confession – Maria told her interrogators that she had been pledged to Satan since childhood, and had been poisoning nuns and causing trouble for decades.

As late as the eighteenth century, the punishment for ‘witchcraft’ was execution, and on the 21st of June, 1749, she was beheaded near the fortress and her body burned. This verdict, when published in broadsheets, shocked Europe, and helped lead to the end of ‘witch’ persecutions across the continent.

This was a little too late for Maria, however – her angry spectre is said to roam the halls of the fortress, in addition to the convent at Unter Zell, expressing her displeasure. Not something you want to come across in the small hours of the night!

It seems that in Germany you aren’t a respectable noble unless you have your own ‘Weisse Frau’ – a ghostly woman, dressed in white, who appears to herald the death of a member of the family. Think banshee, but for the rich.

By far the most famous ‘Weisse Frau’ in Germany is that attached to the Hohenzollerns, the family that would become the emperors of Germany in the 19th and early 20th centuries.

According to legend, this ‘Weisse Frau’ is the ghost of the 14th century Kunigunde von Orlamünde, who fell in love with Albrecht von Hohenzollern. Albrecht, a powerful noble, told Kunigunde that he would marry her if ‘four eyes weren’t in the way’. By this, he meant his parents, who were seeking a more suitable match.

The only problem is that the historical Kunigunde didn’t have any children. Never mind, there are plenty of other candidates in the family history for the ‘Weisse Frau’s’ real identity.

Lurk long enough around the Plassenburg in Kulmbach, the Residenz Ansbach or the Berliner Schloss and you might just see her – although you might want to let the family know she’s arrived.

If you want to see a depiction of her, she’s included as part of the murals in the library at Burg Hohenzollern, south of Stuttgart. 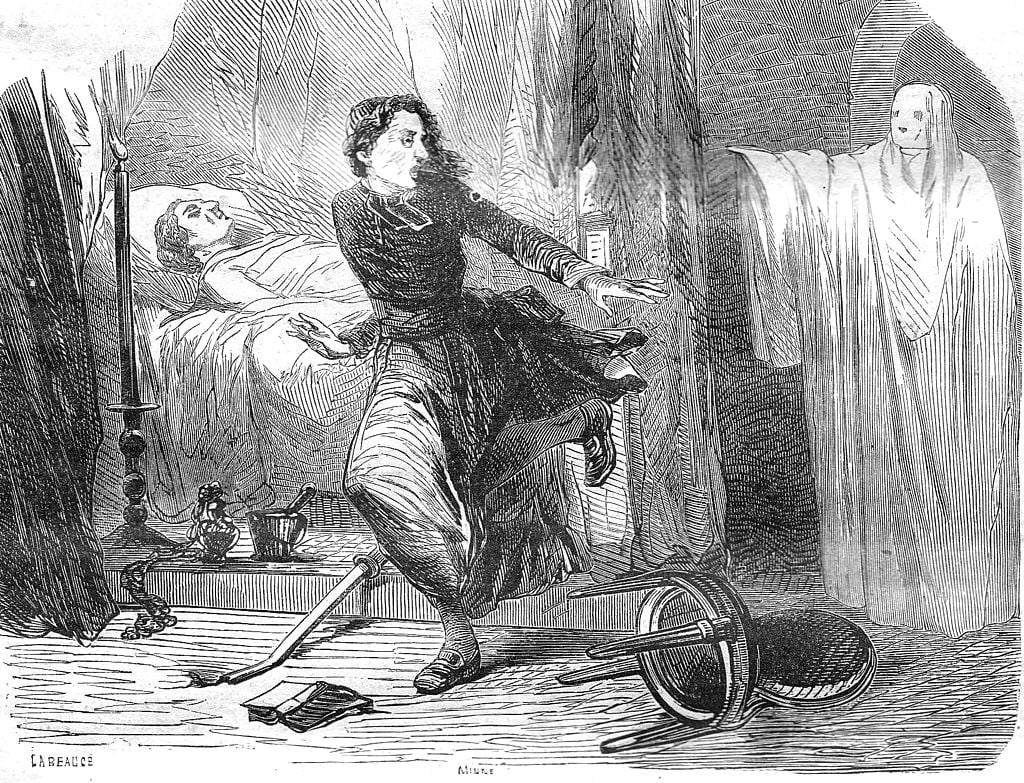 The ‘Weisse Frau’ of the Hohenzollerns as depicted in a 19th century illustration. Photo: Wikipedia

We’re used to watching family squabbles turn deadly in shows like ‘House of the Dragon’ – but did you know George R. R. Martin’s work is heavily influenced by European medieval and early modern history?

One story worthy of the Targeryens is the sad fate of Jakobea von Baden. A lively and beautiful young woman, Jakobea was pledged to marry Duke Johann Wilhelm of Berg, who ruled the area around Düsseldorf in the late 16th century.

Unfortunately for Jakobea, Duke Johann had a mental health condition and was quite often violent. In fact, he was so afflicted, a council ruled in his stead. Her sister-in-law Sybille was also a real piece of work, suspecting Jakobea of trying to take over the duchy.

When the Duke died, Jakobea thought that she may at least be able to improve her condition, while also working at improving the lot of her subjects. However, before she could act, she was found dead in her room in a tower of the Düsseldorf Castle on September 3rd, 1597.

Sybille claimed that Jakobea had died of a stroke, but those who attended her funeral would often comment on the bruises around her neck for years afterwards.

Today the castle’s tower is the only part that remains, and this is where Jakobea has been seen floating around the top of the Turm – quite a terrifying sight if you think about it! 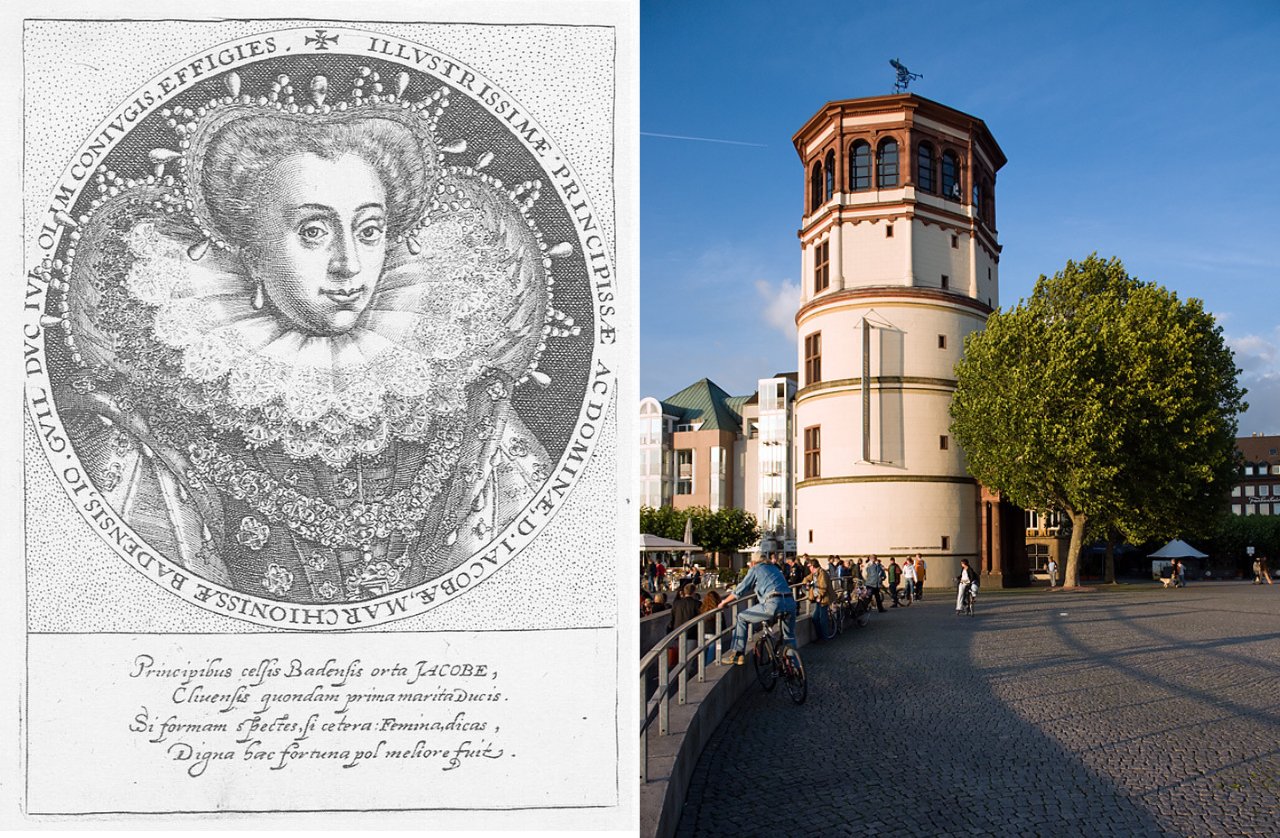 Duchess Jakobea von Baden and the Schlossturm where she died. Photo: Wikipedia

The twin towers of the Frauenkirche are one of the landmarks dominating the Munich skyline, and have done so for over 500 years. It’s also the site of a horrific tragedy that involves one of Germany’s literary giants.

Fanny von Ickstatt, who hailed from a wealthy family, was 17 when she met the dashing Franz von Vincenti, eight years her senior, during a trip to Ingolstadt. She was infatuated with him, and he was her, but Fanny’s mother, Franziska von Weinbach opposed the union.

Franziska did everything she could to oppose the union, telling Fanny she was not to see Franz. Depending on which version of the story you hear, Franz may have ended up seducing Franziska. Nevertheless, Fanny was heartbroken – she felt that she couldn’t go on.

On the 14th of January 1785, she climbed to the top of one of the Frauenkirche’s towers, and when her servant’s back was turned, she threw herself from it, dying instantly. The entire city was horrified at this act, with the tragic case being the subject of discussion for months.

When her house was searched, a copy of Johann Wolfgang von Goethe’s The Sorrow of Young Werther was found on Fanny’s bedside table. This novel, while immensely popular, had a somewhat sinister celebrity – the tale of a heartbroken young man taking his own life was allegedly linked to a rash of suicides across Europe. Goethe himself would visit the site next year – he didn’t have much to say, other than he’d visited it.

To finish, we have a tale with something approaching a happy ending.

In the 1840s, in the small village of Möttlingen, on the edge of the Black Forest, near the town of Calw, lived young Gottliebin Dittus.

This star Sunday school pupil seemed destined for a life of quiet piety, when the departure of her favourite pastor seemed to set her off.

By this, we mean that things took a rather supernatural turn – all pointing to her. While she shrieked and convulsed, and there were ominous rumblings heard around town.

Ghosts were allegedly seen flitting around her small cottage, and there are even reports of her throwing up nails and metal objects.

It was at this point that the new pastor, Johann Christoph Blumhardt took control of the situation and proceeded with a series of exorcisms that lasted a whole two years, from 1841 to 1843.

Eventually, when things seemed to be reaching a crescendo, and Gottliebin’s two siblings seemed to be starting to succumb to the same ‘possession’, the supernatural activities abruptly stopped. .

Gottliebin would go on to marry, have three children, and work for the church, living another thirty years. For the rest of her life, however, there were many questions for her about her experiences – and what exactly she thought had possessed her.

If you visit Möttlingen today, there’s a small memorial and museum devoted to Gottliebin at her former home. It’s perfectly safe to visit by day, but who knows what happens after dusk – to this day, the area has a reputation for strange supernatural occurrences.

Do you have a favourite German local legend or ghost story? Email [email protected] and you may see it covered in a future article