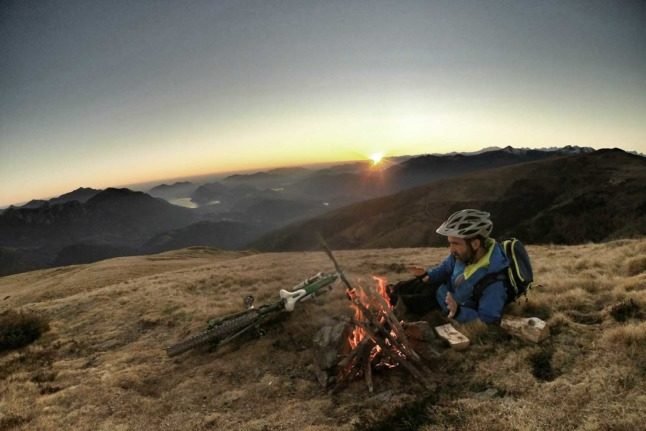 This is a perfectly normal way to enjoy November in Switzerland. Helmet optional. A man sits with a campfire and his bike in the mountains in Ticino, Switzerland. Photo by Graziano De Maio on Unsplash

While September and October bring with them the hope of a late autumnal flourish of sun and warm weather, by the time November swings around, all hopes are dashed.

However don’t fear, with The Local Switzerland’s November survival guide, you can turn that pale frown around.

Here are six brilliant ways to survive November in Switzerland,

Summer’s over, so scrap salad, there’s an abundance of delicious hearty Swiss food out there just waiting to fill your belly. We’re right in the middle of la chasse / wildsaison (hunting season), so restaurant menus are packed with delicious dishes featuring wild boar, deer and other game.

“One of the musts in November is the combination of Spätzli or Knöpfli with cooked red cabbage and caramelized chestnuts and any meat dish with brown sauce,” says food writer Franziska Wick of Little Zurich Kitchen. “As for dessert, it’s the Vermicelles season – a sweet treat made of chestnut purée, whipped cream and often a biscuit base and/or vanilla custard.”

And of course, as the days get colder you have the perfect excuse to chow down on your first fondue of the winter. Yum!

November is the perfect time for a cycle ride. Photo: Grand Tours Project

After all that food, you might want to work it off. While many lifts are shut now, it’s still possible to do some autumnal hiking in certain places – for example in the magnificent Aletsch Arena, where some cable cars run up from the valley floor all year.

Or get on your bike for a cycle ride through the vineyards or lower mountains.

“It may be too cold to ride the high alpine passes but autumn rewards cyclists with beautiful colours, crisp air and quiet roads in the lower parts of the country. It is the best time to ride around lakes or in the countryside on the many bike routes listed on veloland.ch”.

3. Warm up in an outdoor thermal bath

As the days get colder head to one of Switzerland’s wonderful thermal baths to warm up.

There’s something special about lounging in an outdoor pool and feeling perfectly toasty while watching steam rise into the increasingly frigid air.

For a dip with a view, try the Mineralbad Rigi Kaltbad near Lucerne, or Les Bains d’Ovronnaz in the Valais.

4. Visit a Swiss festival (or three)

Just because it’s November doesn’t mean the Swiss haven’t thought up a few convivial get togethers. In Basel, the Herbstmesse (autumn fair) is already in full swing and carries on until November 7th, with fairground rides, stalls and exhibitions to entertain visitors.

In the Jura, the hugely popular St Martin festival, which takes place on the second weekend in November, is an opportunity to eat, drink and be merry. A large market featuring artisan producers takes place in the town of Porrentruy, while restaurants in the area offer guests a hearty menu centred around the humble pig. Book ahead for dinner, as it’s hugely popular.

Head to Bern on November 22nd for the annual Zibelemärit (onion market), where onion producers from all over the canton come to the city to sell around 50 tons of onions, garlic and other produce which hang in decorative strings from the many stalls. It’s also an excuse for a party.

Revellers get up as early as 5am to eat onion tart, drink glühwein and throw confetti at each other, all before work.

Wine is also a recurring theme this month (when isn’t it?).

Head to Vevey’s Foire aux Vins (Nov 17th-19th), where for the paltry sum of 15 francs you can sample the wines of more than 25 producers from the area.

Or try Zurich’s wine fair, the Expovino (now to Nov 14th), where visitors can hop aboard 12 boats moored at Burkliplatz to taste wines from around the world. A carousel against a blue sky in the Swiss canton of Zurich. Photo by Chris Zueger on Unsplash

With ski season around the corner, now’s the time to get your gear in order and think about hiring or buying skis for the season. It’s even possible to try before you buy.

The high altitude resort of Saas-Fee, which already has snow on higher pistes, is offering ski-test deals throughout November where you can get on the slopes and test out the latest skis and snowboards before the tourists have even thought about washing the dirt off last year’s salopettes.

6. Get out of here on a cheap flight If you really can’t bear to stay in Switzerland in November then now’s the time to take advantage of its easy connections to the rest of Europe.

With cheap flight deals on most airlines this month, it’s the perfect time to nip over to London, Paris or Milan and do your Christmas shopping early.

And with the strong franc, you’re bound to pick up some bargains.

As certificates are valid for nine months after the second vaccine dose or a booster, “millions of Swiss Covid certificates will expire by autumn at the latest”, according to Swiss news outlet 20 Minutes.

As many Swiss received their most recent shot in late 2021, the nine-month period will soon be coming to an end.

Although this is not a problem domestically as proof of vaccination is no longer required in Switzerland, it may pose issues for travel.

Since many countries still require a vaccination certificate for entry, and as the second round of boosters is not yet available in Switzerland,  this means that a large number of people may not be able to travel abroad.

And while other countries have already started to administer second booster shots, Swiss health authorities are dragging their feet, not having even issued a recommendation for the fourth dose yet.

This worries some MPs, who are calling on the government to make second boosters available soonest possible.

“The past has shown that cantons are not always sufficiently prepared. Something like this mustn’t happen again”, said MP Fabian Molina, adding that anyone travelling abroad should be able to be re-vaccinated if they wish.

Another deputy, Yvonne Feri, noted that the federal government and the cantons have to prepare to vaccinate again within a short period of time.