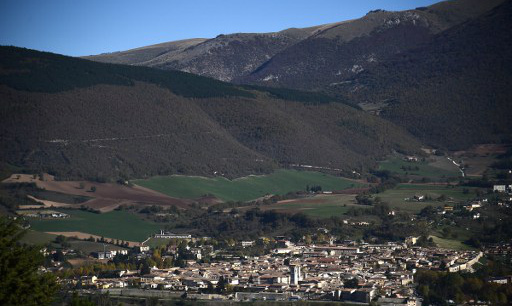 A general view of Norcia, one of the worst-hit towns. Photo: Filippo Monteforte/AFP

Farming is the primary industry in the mountainous region where tens of thousands of livestock are affected, according to Coldiretti.

It is crucial to the local economy which revolves around agricultural production and agritourism but where 100,000 animals – mostly cows, pigs and sheep – are now in danger of starving.

“The earthquake has hit hard in an area dominated by agribusiness with a significant amount of livestock farming which must receive concrete help so as not to be abandoned and depopulated,” said Coldiretti president Roberto Moncalvo.

Sunday's 6.6-magnitude earthquake – the most powerful in 36 years – near the medieval town of  Norcia – famed for its ham and salami – did not cause any deaths but has left more than 15,000 people homeless.

It was the third powerful tremor in the region in just over two months and was followed by a series of aftershocks.

But many farmers are refusing to leave their farms because they don't want to abandon their livestock.

Coldiretti says significant numbers are struggling to find food and water for their herds, while damage to roads in remote areas is preventing farmers from delivering goods, including dairy products.

Coldiretti has provided caravans to some of those forced to leave their farms in order to enable them to stay close to their livestock.

The quake left thousands of homes in ruins and rendered many villages and small towns unsafe.

Even important historical landmarks such as the Abbey of Sant'Eutizio in Umbria – one of the oldest monastic sites in Italy with roots dating back to the fifth century – have been damaged or reduced to piles of rubble.