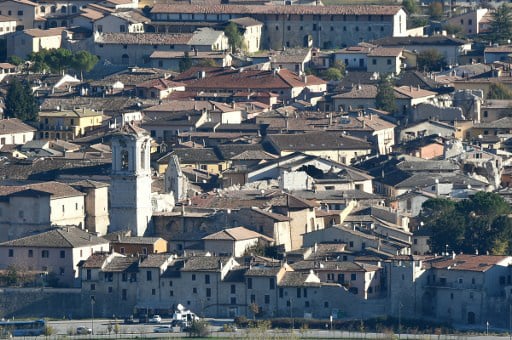 A view over Norcia, where the quake's epicentre was located. Photo: AFP

Although Sunday's 6.6-magnitude tremor did not result in any deaths, the third powerful quake in just over two months has left thousands of homes in ruins or structurally unsafe and emptied a string of villages and small towns across the country's mountainous central regions.

The majority of residents of the devastated villages and towns have taken refuge with friends and family as they anxiously await a green light to return to their homes.

But the national civil protection agency said on Monday it was providing assistance to 15,000 people affected by Sunday's quake, which was so powerful it caused cracks in buildings in Rome, some 120 kilometres (75 miles) away from the epicentre near the Umbrian town of Norcia. Some 4,000 people from the worst-hit area around Norcia have been sent to hotels on the Adriatic coast with another 500 taken by bus to the inland Lake Trasimeno.

More than 10,000 are being put up in converted sports halls and other temporary facilities, including tents, across Umbria and the neighbouring Marche region, the protection agency said.

A further 1,100 people are still in Adriatic coast hotels as a result of the August 24th Amatrice earthquake, which left nearly 300 dead.

Given the strength of Sunday's new quake, experts said it was remarkable that it had not resulted in any more fatalities. It did however take a heavy toll on the country's rich architectural heritage, with the 14th Century Basilica of St Benedict and the 13th Century Civic Tower in Amatrice among the buildings unable to resist yet another reminder of how vulnerable much of Italy is to seismic shocks.

Nearly all schools in Rome were closed Monday for structural checks and there was traffic chaos in the east of the capital because of the closure of a key flyover for assessment by engineers.

A large crack appeared in the facade of one of Rome's four principal papal churches, the Basilica of St Paul Outside the Walls.

The quake was Italy's biggest since a 6.9-magnitude one struck the south of the country in 1980, leaving 3,000 people dead.

It has been followed by hundreds of powerful aftershocks feared to have further compromised the safety of buildings in the affected area. 'I see no future'

With many roads blocked by landslips or huge boulders dislodged by the quake, civil protection chief Fabrizio Curcio and reconstruction supremo Vasco Errani were surveying the damage by helicopter.

Prime Minister Matteo Renzi has vowed that every damaged house will be rebuilt and that communities he described as part of “the soul of the country” would not be abandoned.

But after the trauma of three major quakes in such quick succession, the future of the already sparsely populated affected areas looks bleak.

“Everything here will have to be rebuilt. There is nothing really solid left in the centre.

“We have always bounced back after other earthquakes but we've never had to deal with one as strong as this.” Much of Italy's land mass and some of its surrounding waters are prone to seismic activity with the highest risk concentrated along its mountainous central spine.

Just over 300 people perished when a quake struck in 2009 near the city of L'Aquila, just to the south of the region affected by the most recent tremors.

In 1980, a quake near Naples left 3,000 dead and an estimated 95,000 died in the 1908 Messina disaster, when a powerful quake in the waters between mainland Italy and Sicily sent massive tsunami waves crashing into both coasts.

By Franck Iovene with Angus MacKinnon in Rome