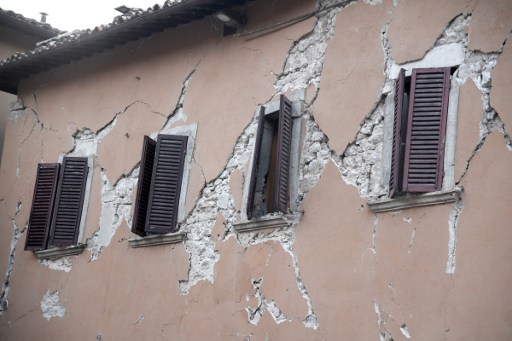 On Thursday evening, 24 hours after a series of tremors first hit, thousands of people settled in for the night in their cars, hotels, temporary accommodation such as gyms and churches, and even tent camps.

Over 4,000 people have been displaced by the earthquake, which affected 20 towns in Italy's Marche region.

No serious injuries caused by the quake have been reported, something which Interior Minister Angelino Alfano described as a “miracle” given its severity. One man reportedly died of a heart attack, but it is not clear if this was directly related to the earthquake.

During the night, around 100 aftershocks measuring more than 2.0 on the Richter Scale were recorded by geologists, some of them felt by those in the area. The biggest was of a 3.5 magnitude, at 4:13 am with an epicentre 10km from the town of Ussita.

In total, more than 200 aftershocks have been recorded.

No further building collapses have been reported. Geologists from Italy's National Institute of Geophysics and Volcanology have warned that the tremors are likely to continue for several more months; however, it said that they should become weaker over time.

INGV has recorded 18,000 tremors from the August 24th quake, but said on Thursday that Wednesday night's quake was a “new” movement rather than a strong aftershock.

Prime Minister Matteo Renzi yesterday visited Camerino, one of the affected towns. “Italy does not leave its citizens alone, we are stronger [than an earthquake] and we can make it,” he told residents.

Italy's government has set aside €40 million for recovery efforts, and extended the state of emergency put in place after the August quake.

Schools in the area will remain closed until at least October 31st, while structural checks are carried out.

After August's earthquake in Amatrice, two thirds of the affected region's schools were left unusable by the disaster. Probes have been opened to determine why some buildings supposedly built to withstand quakes – including the Romolo Capranica school in Amatrice, a building which had recently been upgraded in line with seismic standards.