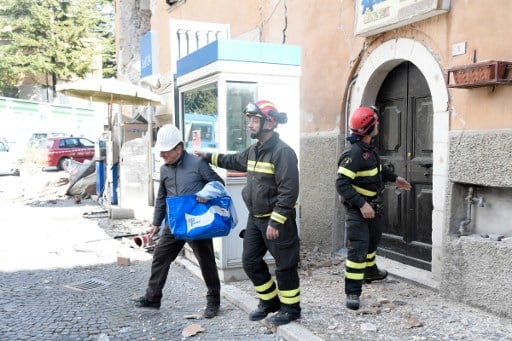 “It's never ending. These damned earthquakes won't leave us alone!”

Located in the mountainous interior of the Marche region, Ussita was close to the epicentre of two powerful shocks that shook a large swath of Italy on Wednesday evening.

Elderly villager Bruno recounted how he had headed straight for his car as soon as the first one struck. Experience had told him he had to get out of his house.

“The second one was much, much stronger than the first,” he said. “It seemed like it was going to go on for ever. Rubble next to a badly damaged building. Photo: Tiziana Fabi/AFP

“I thought my car was going to be turned over. It's a disaster. What on earth is going on under our feet?”

Although no deaths were reported, Wednesday's tremors did significant damage and left the area's population in shock once more, two months after nearly 300 people died in another quake centred closed to the nearby town of Amatrice. Dust caused by the collapse of one building. Photo: Tiziana Fabi/AFP

“The lights went out, our village is finished,” he said a few hours later as he prepared to chair a crisis meeting of rescue workers in a tent hastily erected in the middle of the village.

The winding road that leads up to the village was strewn with stones and debris that had tumbled down the mountainside.

Numerous buildings looked like they have been hit by bombs, others had collapsed completely.

Aftershocks, some powerful, some just strong enough to provide a reminder of the big ones, rumbled repeatedly throughout the night.

The villagers have got used to feeling the earth move beneath them, having been shaken by thousands of aftershocks since the August 24th quake, which left nearly 300 people dead. Residents walk through the streets of their damaged hometown. Photo: Tiziana Fabi/AFP

“We are a bit used to this now,” says Cappa with an air of weary resignation.

On the edge of the village, Red Cross staff have re-established tents they first put up in August, housing around 100 of the village's 300 residents.

Some smoke anxiously, others play cards to pass the time. A few try to get some sleep on camp beds.

“It is the one place they feel safe,” said Alessandra Franconi, a volunteer helping the aid effort who says the rest of the village's inhabitants have either opted to sleep in their cars or headed for a local campsite.

Wooden huts alongside the tents have been there since 1997, when they served as accommodation for victims of a previous earthquake before later housing a temporary village school.

Another resident, Sergio, is feeling anxious about what the arrival of daylight will reveal.

“I have no idea what state I am going to find my house in. We'll see. The only thing I hope is that it did not collapse on top of anyone.”