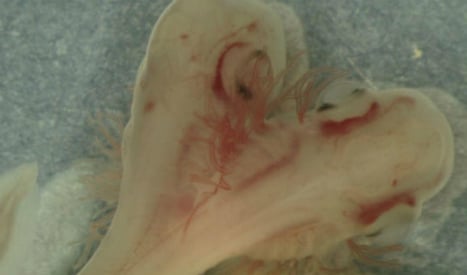 The shark embryo belongs to the rare and threatened species Galeus atlanticus, a fish being studied by researchers at a lab in the Malaga university, according to a paper published in the Journal of Fish Biology.

Its two head each had “a mouth, two eyes, a brain, a notochord and five gill openings on each side”, according to the scientists, and the two heads came together just behind the gils.

Most of the shark’s organs were fused too but contained within one body. “There were two hearts, two oesophaguses, two stomachs, two livers, but a single intestine with a spiral valve,” the team write.

The research paper explains that the two-headed shark embryo would have had difficulty surviving at sea, because its condition would have struggled to swim fast and hunt.

The new discovery is thought to be the result of genetics rather than any kind of mutation caused by pollution, and could help shed light on the mystery of dicephaly – the phenomenon when animals are born with two heads.

The shark was one of 797 embryos originally intended to be used in studies of the cardiovascular system.

“As far as is known, this paper gives the first description of a two-headed shark embryo belonging to an oviparous species” said the authors, describing a species that hatches eggs outside the body rather than gives birth to live young.,

This species of shark grows up to 45cm in length and poses no threat to man. A two-headed shark could never survive in the wild. Photo: Screenshot from movie.

Image of injury after it was stitched up at Elche hospital Photo: Ayuntamiento de Elche

The 40-year-old Spanish woman let out a blood curdling scream and was dragged bleeding from the sea by her husband and a lifeguard who came to her aid while she was swimming with her five-year-old son on DAY.

“She felt a great pain,” her husband told local newspaper El Informacion. “And let out a scream that scared us all.”

She was paddling in shallow water which came to just below the knee and at first, she presumed she had stepped on broken glass.

But she was taken to hospital medical staff said it was clear that the injuries were sustained by a fish bite.

She was treated for a partially severed tendon in her foot as well as several other cuts that required stitches.

She was discharged several hours later and left the hospital on crutches and with a bandaged lower leg.

The couple from Valladolid in northern Spain  were on the last day of their holiday, staying at a campsite near El Rebollo beach in Elche on the Costa Blanca.

Lifeguard service together with local police patrolled the beach looking for the culprit and caught a large Bluefish, which they believe was responsible for the incident.

Known as Pez Golfar in Spanish, the species (Latin name Pomatomus saltatrix) can measure between half a meter to a meter in length and is commonly found in Mediterranean waters.

It does not normally attack people but preys on smaller fish in the shallow water.

Image of a bluefish, the likely culprit. Photo: Wikimedia