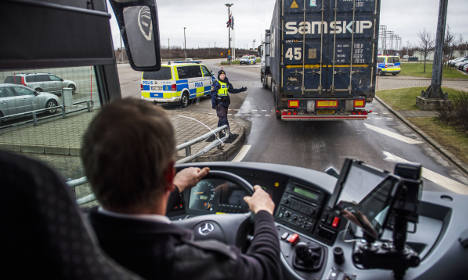 A police officer carrying out a check at Sweden's border with Denmark. Photo: Emil Langvad/TT

EU rules state that countries in the passport-free Schengen zone can only bring in temporary border controls under exceptional circumstances. Sweden introduced its controls in November 2015 following an influx of asylum seekers to the country, before the EU later granted a request from the Nordic nation to extend the measures by six months last May.

The extension is due to expire on November 11th, but the European Commission announced on Tuesday that it will propose a recommendation to be adopted by the European Council to prolong the controls at the Swedish border, as well as borders in Austria, Denmark, Germany and Norway.

“The Schengen area without internal borders is a historical achievement which we must preserve. We are working hard to return to a normal functioning Schengen area as soon as possible and we have made significant progress, but we are not there yet. That’s why we propose today a further limited extension of certain border controls, in line with the Schengen rules. In fact, we are protecting Schengen by applying Schengen,” European Commission First Vice-President Frans Timmermans said in a statement.

The decision follows pressure from Germany and Denmark in particular to approve a prolonging of the border checks. Sweden has not yet stated whether it will extend its own controls, but the country’s Interior Minister Anders Ygeman on Tuesday welcomed the European Commission’s decision:

“It’s good that the Commission has changed its mind. We now have the freedom to make a decision at the end of net week,” Ygeman told Swedish news agency TT.

In its statement, the European Commission highlighted however that the relevant EU Member States should also consider feasible alternatives to prolonged border controls, and that if lengthened controls are opted for, they would be subject to constant review:

“Those Member States that opt to continue carrying out internal border controls pursuant to today’s Recommendation should review weekly the necessity, frequency, location and time of controls, adjust the intensity of the controls to the level of the threat addressed, and phase them out wherever appropriate. Member States will now also have the obligation to provide detailed monthly reports on the controls carried out and their necessity.”

Sweden will not analyse the Commission's decision, Ygeman said, adding that “the commission has clearly set much stricter requirements for extension this time”.

Earlier on Monday, the Swedish migration authority Migrationsverket announced that it has reduced its forecast for the number of people it expects to seek asylum in the country this year to 29,000. The 2016 estimate is less than a fifth of the record 163,000 asylum requests Sweden received in 2015.

Migrationsverket explained that the reduction is likely down to a combination of a number of measures, including border controls, the introduction of photo ID checks on the Öresund rail link between Sweden and Denmark, and the EU’s deal with Turkey, which means that refugees are returned across the border from Greece unless they apply for asylum upon reaching the EU country.