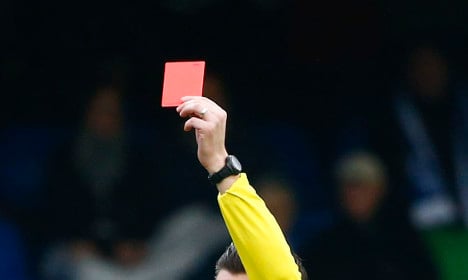 File photo of a referee holding a red card not related to the story. Photo: Stefan Jerrevång/TT

The incident started when one of the coaches of a Hammarby youth team had an argument with the referee at the end of a match against another junior side at the tournament for 11-year-olds in Åkersberga, northern Stockholm.

According to a witness report in Swedish tabloid Aftonbladet, one of the coaches is then said to have headbutted the referee, resulting in a scuffle breaking out between the match official, the coach and the parents.

One of the parents ended up being taken to hospital for an operation after breaking a leg in two places.

The Local contacted Hammarby for comment on what happened. Their club head Peter Kleve referred to a statement on their website.

“A police report has been drawn up over the violence that the coach was subject to. We welcome the police investigation,” the Hammarby statement reads.

Speaking anonymously to Aftonbladet, the referee involved in the melee insisted that one of the coaches instigated the fight, and that the leg break was caused by the very parent who suffered it.

“I asked why he (the coach) called me stupid and he said ‘it’s true’. I replied that he is the one who’s stupid, and without any reaction he headbutted me in the face,” the referee said.

“I definitely landed a couple of punches on the coach, but it was in self defence and to free myself. But then a parent came running from behind and kicked me straight in the back (…) I didn’t know until the ambulance came that he had hurt himself badly. He came to hurt me and hurt himself, it’s karma,” the official added.

Last Monday the senior derby match between Hammarby and local rivals Djurgården was suspended for half an hour after supporters of the latter team threw flares, flagpoles and other objects at police officers and security staff. Several people were arrested for rioting.

That came only a week after another match between the two teams saw scuffles break out between supporters. One man was arrested accused of leading a riot at the U21 game.