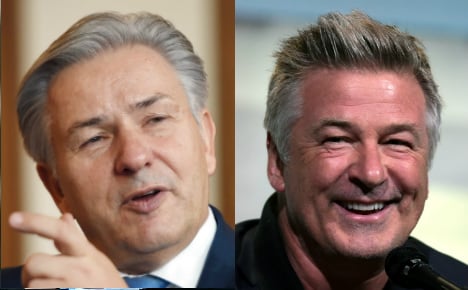 Here are seven found by The Local. Are there any more you can think of?

German footballer Mesut Özil currently plays for Arsenal FC, but he is also a member of the German national team, and starred in the 2014 World Cup winning side. The man on the right is Enzo Ferrari, an Italian racing driver who created a new car brand – and the famous cars still carry his name today.

Known for his finesse and improvisation, Özil moved to Arsenal in 2013 for a fee of around €50 million, the most ever paid for a German player. That's even more costly than his doppelgänger's cars – the most expensive Ferrari selling for $38.12 million (€34.8 million) at auction in 2014.

Now the coach of world number one tennis player Novak Djokovic, Boris Becker was once pretty handy with his own racket. The youngest ever winner of Wimbledon aged just 17, Becker went on to win six majors, and is now a familiar face in the commentary box.

But with his signature ginger beard and slicked back hair, there's definitely a likeness with Dutch artist Vincent van Gogh, who was renowned more for his brushstrokes than his ground strokes.

Dafuq did I just see : Gwyneth Paltrow on the left, Heidi Klum on the right ! pic.twitter.com/eKYqDj18lb

Spotted by La Myrtille on Twitter, German modelling icon Heidi Klum could easily be muddled up with American actress Gwyneth Paltrow on the red carpet. Klum became the first German Victoria's Secret Angel in 1999, and she has been a judge on Germany's Next Topmodel for ten years since the show began in 2006.

Paltrow gained attention for her roles in Seven and Emma, won an Oscar for Shakespeare in Love, and has in more recent years created a following around her lifestyle website Goop.

Another German football player, Bastian Schweinsteiger retired from the German national team this year, following a two-year stint as captain. After a huge 500 matches played at Bayern Munich, he moved to Manchester United in 2015.

At the end of last year, the sportsman took legal action against a Chinese manufacturer who created a doll which looked identical to him. The two-kilogram doll comes with a woolen cap bearing a swastika and a set of outfit changes.

The company denied the claims that the doll, which is called “Bastian”, was based on Schweinsteiger, saying that “we think that all Germans look like that”.

One of Germany's most well-known politicians, Klaus Wowereit, served as mayor of Berlin from 2001 to 2011. Known for his exuberant manner, he came out as gay in 2001, coining his famous phrase “Ich bin schwul, und das ist auch gut so” (“I am gay, and it's also good like that”).

But he also shares an uncanny resemblance with American actor Alec Baldwin, known for roles in The Departed and The Hunt for Red October.

Maybe it's just something about footballers. This one, Sami Khedira, plays for Juventus and represents his national team.

But, with his long hair and his carefully maintained eyebrows, there's definitely something of Lúcia Moniz from Love Actually in him. The Portuguese actress played a cleaner whom Colin Firth's character fell in love with in the acclaimed 2003 British comedy.

This time it's the coach of the German football team, spotted by Tweeter Fantasy Fumblies. Formerly a player, Jogi Löw is probably more famous as a coach, leading Germany to victory at the 2014 FIFA World Cup.

On the right is Peter Gallagher, an American actor most renowned for his role in American Beauty, and for starring in The O.C. from 2003 to 2007. They both sport very similar mops of dark hair, and clearly see the same hairdresser for their fringes.