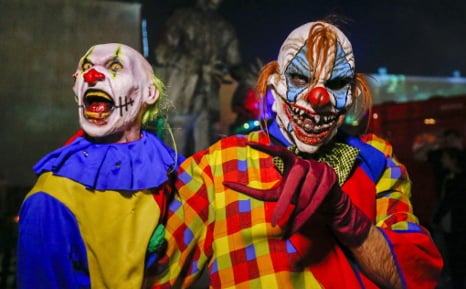 Late on Sunday, three masked men – two of whom were wearing clown masks – raided a pizza shop in Potsdam, according to a police report.

One worker was tasered during the violent robbery, and had to be treated at the scene by emergency services. The men threatened other employees with “objects which looked like firearms”.

One of the men put his hand into the till and stole the day's earnings.

Police have not yet been able to track down the men, but suspect that they fled in a car.

Authorities are searching for witnesses with information regarding the robbery, or anyone who might recognize the men involved. All three men reportedly spoke High German without an accent.

Last Friday, a man in a clown mask armed with a gun and knife threatened two young men at a train station in western Germany.

The recent 'clown craze' has taken a violent turn in recent weeks, with some clowns now being armed.

What began in the United States has become a global phenomenon, with social media accounts emerging to track sightings and whereabouts of “killer clowns”.

The craze has also made its way to other parts of Europe, with clown sightings reported in both the UK and Sweden.

Last week, a teen was injured by a clown in Sweden, who cut his shoulder with a knife before running away.

Over the weekend, another three people dressed as clowns assaulted a man in Sweden.