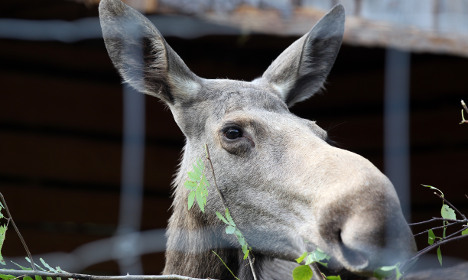 Not an animal you want to cross – unless there's a street light nearby. Photo: Pernilla Wahlman/TT

The incident occurred in Vendelsö, south of Stockholm. The man was in the vicinity of a supermarket when a startled elk started running towards him.

Despite there being several other people in the vicinity, the elk only had angry eyes for the one specific man it had decided to chase. So the victim took to the skies, via a lamp post.

According to witness reports, a motorist eventually came to the rescue by honking his horn, causing the elk to flee in the direction of a nearby forest. Neither the nimble man nor the elk were harmed.

“I came driving past and saw a man sitting on the lamp post while an angry elk stood below and looked at him. It was quite comical. Cars had stopped along the side of the road. I honked my horn to see if I could scare it, but it didn’t react at all,” eye-witness Jonny Karlström told newspaper Aftonbladet.

A game warden has now been tasked with locating the irritated elk to make sure that it has not gone to a new area to wreak further havoc.