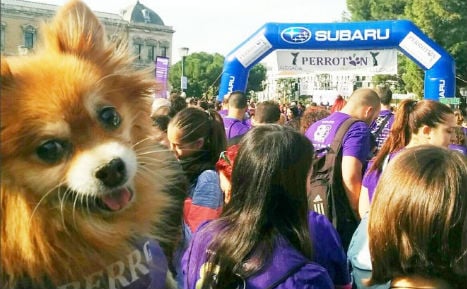 Thousands joined in the Perrotón in Madrid. Photo: Saraycalpe / Instagram

Around 3,500 dogs of assorted breeds ran through the streets of Madrid in the fifth annual Perroton – Dogathon – an event aimed at encouraging people to adopt abandoned dogs from shelters, rather than buy them from breeders.

“Our message is to promote adoption as the responsible way to own a pet,” explained actor and singer Alejandra Botto, who launched Perrotón 2016.

“Each year there are more adoptions… we want to continue to encourage people to adopt,  to understand that adopting is a great thing to do because the shelters are full of every kind of dog.”

To a cacophony of barks, runners navigated dogs on leads, while some owners chose to carry their pampered pooches in their arms to complete the run.

Among those to join the event was  James Costos, the U.S. Ambassador to Spain and his dog Greco.

Greco and I will run in the @PerrotonEspana to highlight the work of the U.S. Government against animal cruelty. https://t.co/2Pj0AYmnWs pic.twitter.com/BnIAEAOJ0a

The ambassador received an honorary award for his country's efforts against animal cruelty in recognition of the FBI adding animal cruelty to its list of Class A felonies, alongside homicide and arson.

Spain has made great strides in recent years to clamp down on animal cruelty with several landmark cases seeing abusive owners sent to jail for cruelty to their dogs.

Earlier this year, the Madrid regional parliament introduced a “no kill policy” at its animal shelters ending a practice that saw healthy strays sacrificed if they weren’t claimed or rehomed within ten days.

Since the summer Madrid has allowed dogs to travel on the metro.

By then end of the year, city authorities said that a pet adoption centre will be opened within the Retiro park.