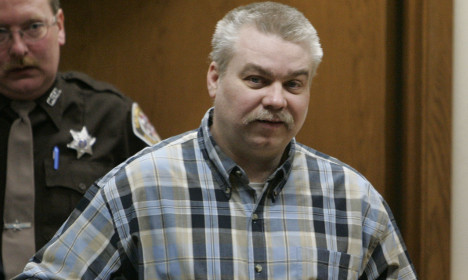 Steven Avery (right) was sentenced to life in prison in 2007. Photo: Dwight Nale/AP

The documentary series ‘Making a Murderer’ looks at the story of Steven Avery, who is currently serving a life prison sentence for the murder of photographer Teresa Halbach in Wisconsin. He maintains that he is innocent.

Now, researchers at KI will carry out tests of the blood trail used as evidence in the case, which should help show whether he was correctly convicted or not.

KI senior researcher in molecular biology Kirsty Spalding watched the Netflix series when it aired in 2015. When she realized that Avery had been imprisoned without proper testing of the blood evidence being carried out, she contacted his lawyer, Swedish newspaper Svenska Dagbladet (SvD) reports.

“I e-mailed her to say ‘I believe we can determine with radioactive carbon-dating whether the blood was planted or not’. I received a reply within half an hour,” Spalding told SvD.

In the series, the documentary makers argue that Avery was wrongly convicted, and that local police and prosecutors may have planted his blood in 25-year-old photographer Halbach’s vehicle.

Avery, 54, had previously been acquitted in 2003 of the 1985 rape and attempted murder of Penny Beerntsen, for which he served 18 years in prison.

But in November 2005 he was arrested again, this time on suspicion of murder in a new case. Two years later he was sentenced to life imprisonment for the killing of photographer Halbach.

The practice that makes the new blood test possible is radiocarbon dating. The large increase in radioactive carbon in relation to non-radioactive carbon can be used as a timeline which is helpful when dating for example human tissue.

“I thought we could measure the level of radioactive carbon in relation to normal carbon and from there know whether the blood from Steven Avery’s conviction is from 1996, or from the murder of Teresa Halbach which was sentenced in 2005,” Spalding said.

If the blood is old, it could be a sign that it was planted. When the test will be performed is not yet known.

Mahmut Tat, who was sentenced to six years and 10 months in jail for PKK membership in Turkey, fled to Sweden in 2015 but his asylum request was rejected.

Tat arrived in Istanbul on Friday night having been detained by Swedish police, the Anadolu news agency reported.

He was taken by Turkish police soon after arriving at Istanbul airport and referred to court on Saturday, the private NTV broadcaster reported.

Turkey has accused Finland and Sweden in particular of providing a safe haven for outlawed Kurdish groups it deems “terrorists”, and held back on ratifying their NATO bids despite an agreement in Madrid in June.

Finland and Sweden dropped decades of military non-alignment and sought to join NATO in May, after Russia invaded Ukraine.

The decision requires a consensus within the US-led defence alliance, but only Turkey and Hungary are yet to ratify their membership.

Foreign Minister Mevlut Cavusoglu held trilateral talks with his Swedish and Finnish counterparts on the margins of a NATO meeting in Bucharest this week.

“The statements (coming out of Sweden) are good, the determination is good but we need to see concrete steps,” Cavusoglu said.

Ankara has said it expects Stockholm to take action on issues including the extradition of criminals and freezing of terror assets.