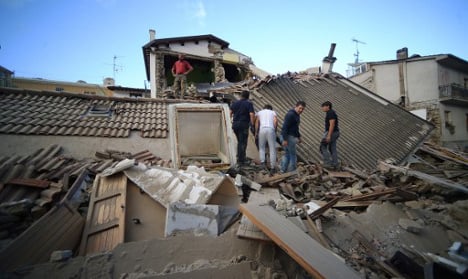 A sum of €300 million has been set aside for the first phase of reconstruction, while the total rebuild is expected to cost €4.5 billion. Broken down, that's roughly €3.5 billion for private buildings and €1 billion for public buildings.

The full resources are set to be approved in Italy's Budget Law, which will be passed on Saturday.

As for where the money comes from, about six percent is provided by the European Union, while the Italian state is footing the rest of the bill. Over €15 million has been received in donations.

Government commissioner Vasco Errani, who is in charge of the reconstruction, said 62 towns affected by the earthquake would receive government assistance.

However, some towns have already begun to protest at their exclusion from the decree. The mayor of Camerino in the Marche region, Gianluca Pasqui, said it was a “shame” that his and other towns in the Macerata province would not receive government assistance.

Accumoli was badly hit by the earthquake. It will be reborn, stronger than ever, together.

Individuals are entitled to up to 100 percent repayments of the losses of their homes and businesses – including second homes.

“The second homes in these areas are family homes, representing local identity and economy,” the decree notes.

However, the 100 percent repayments only apply to buildings in the town centres or villages, while home-owners outside the towns can expect compensation of up to 50 percent. This “strategic” decision has been made in order to focus reconstruction efforts on the historic centres.

Fewer than 300 people are still living in the temporary tent accommodation erected in the immediate aftermath of the quake.

The buildings will not only be rebuilt, but upgraded to improved seismic standards, meaning that another earthquake of 6.0 magnitude would not cause such devastation.

The quality of the buildings in the area was a subject of controversy in the weeks following the quake, as it emerged that recently restored buildings, including Amatrice's school, had not been able to withstand the quake.

A bell tower in Accumoli killed a local family when it fell on their home and the Romolo Capranica school in Amatrice, a building which should have been quake-proof, was also reduced to rubble.

Shoemaker Tod's will open a factory

Tod's, which recently financed a massive reconstruction effort of Rome's Colosseum, will open a factory in Arquata, hopefully giving a boost to the local economy and providing jobs for local youngsters.

Renzi said that the opening of a new factory sent a positive message that the private sector could also help in the recovery. He encouraged businesses to invest in the other affected towns.

Economic assistance
As well as encouraging large businesses to do their bit to promote economic recovery in the affected towns, local businesses will also receive loans and waivers on paying certain bills and taxes, allowing them to restart production more efficiently.
A significant portion of the aid has been allocated to the farms in the area, and farmers can expect up to 100 percent of the costs of repair, restoration and reconstruction of agricultural buildings.

Italy's National Anti-Corruption Auuthority will keep a close eye on the rebuild, performing regular checks, and Renzi vowed that the money would be spent efficiently to ensure there was no waste.

The decree also ordered any companies working on the reconstruction to sign up to an 'antimafia white list'.

Renzi vowed: “We won't leave you alone. We'll do this – all together.”

The premier visited three of the worst affected towns – Arquata in the Marche and Accumoli and Amatrice in Lazio – after the signing of the decree, and was pictured hugging some of the residents.

However, he did not pretend that the recovery efforts would be easy, saying it would take “a long time”.