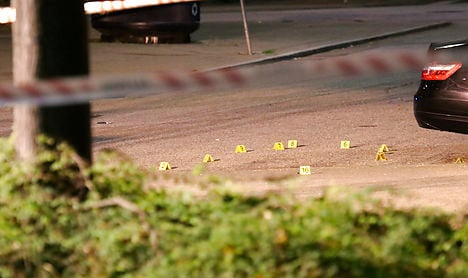 Four men were shot, one of them died. Photo: Scanpix
A total of four men were shot in the city’s Østerbro district shortly after 10pm on Friday. A 30-year-old man was later reported dead.
“It was the hardest hit [victim] who is now dead. It is a man from the capital area. His relatives have been informed,” police spokesman Torben Svarrer told news agency Ritzau.
The three other men who were shot were not in a critical condition. Police did not release information about the connection between the four victims.
Police said that the men were shot by someone who stepped out of a car that approached the area near Hans Knudsens Plads.
According to investigators, the involved car was later set on fire in Lyngby.
No arrests have been made but police said on Twitter that two people were sought in connection with the shooting.
“We are searching for two people after last night’s shooting, which was likely gang-related,” police wrote.

In a subsequent tweet, police wrote that investigators were gathering information about the “presumed perpetrators” but said that there would be no additional information released for the time being.

Police told Ritzau that the incident could be related to other recent shootings in the Copenhagen area.
“It is part of our considerations that this has connections to the gang environment. We don’t know it for sure but it is reasonable to assume given the episodes that have occurred recently,” spokesman Henrik Brix said.
The previous weekend saw three shootings in the greater Copenhagen area in a span of less than 24 hours. One of those incidents was also in Østerbro.
Url copied to clipboard!