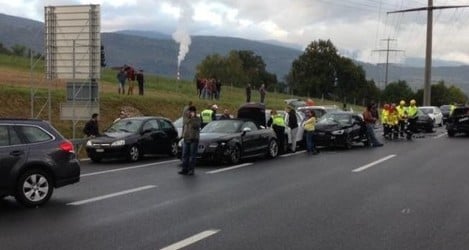 Police in the canton of Neuchâtel said the accident, in which 15 people were injured, happened on the A5 motorway near Thielle at around 4pm.

According to a statement, the hailstorm was very heavy and localized, and covered the motorway in a thick sheet of ice.

Twenty-four cars piled into each other.

Police said the crash was likely caused by drivers not paying adequate attention to the road conditions and not slowing down.

Ten ambulances were immediately deployed and 15 people with minor injuries were transported to hospitals in the area. No one was seriously hurt.

News agencies said the hail, which also hit the area of Biel, had followed thunder and lightening in the country’s northwest as winter made a dramatic appearance.

The hailstorm lasted around half an hour and then turned to rain.

Other areas of the country also saw a return to winter on Sunday. The region of Zurich, Lake Constance and central Switzerland experienced cold and wet weather.

Up to 20 centimetres of fresh snow was measured at high altitudes on Monday morning.

Meteorologists say the cold snap will last for several days but drier weather is on its way.

Snowfall in Switzerland in October has been recorded six times since 2002.