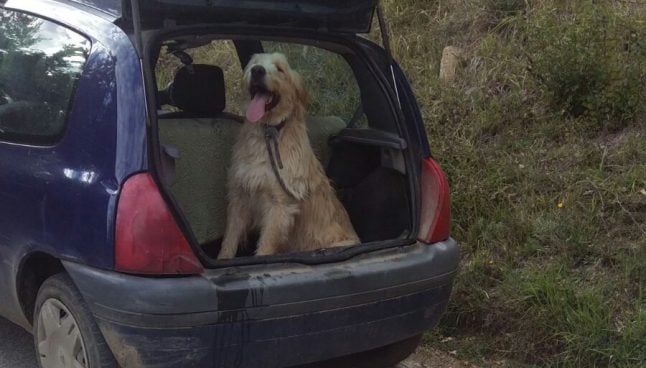 The dog, after being rescued by volunteers. Photo: OIPA

The man tied the pet to his car using a rope before driving over the animal, the Italian branch of animal protection organization OIPA said on Monday.

He reportedly explained his actions by saying that he wanted to “teach it a lesson”. The animal had been playing with dogs from the Civil Protection Department – which are in Amatrice to help with the post-quake recovery – rather than responding to his calls.

Police pursued the man and rescued the animal after noticing a trail of blood behind the car.

The animal, a large sheepdog, was “visibly scared and had difficulty breathing” and a vet from Oipa treated it for injuries to its paws, bleeding and a low body temperature.

“The man has not shown the slightest remorse for the torture inflicted on the animal,” said Oipa, which added that the man “said he had done much worse” to the other animals on his farm.

In addition to being charged with animal abuse, the man will now face further police checks on his farm. The sheepdog was confiscated by Oipa and is recovering at a kennel in nearby Rieti.

“It is terrible to see that in a scenario which is already so dramatic, you can witness acts of pure evil and violence,” said Enrico Piacenza, who works for Oipa and is taking care of the injured dog.