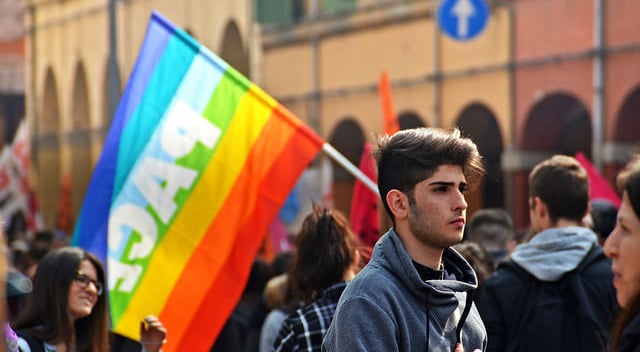 The march condemns war around the world, and calls for international institutions and individuals to take a stand against violence of all kinds.

Participants included groups working with victims of domestic violence, the family of Giulio Regeni, the Italian phD student who was tortured and killed in Egypt earlier this year, and volunteers who work with migrants and refugees.

Organizers said that the participants came from 500 cities across Italy to walk the 24km route – an event which has been held annually since 1961.

Some carried flags representing their region or organization, while others held photographs of migrants crossing the Mediterranean and victims of bombing in Aleppo.

The president of Italy's Chamber of Deputies, Laura Boldrini, opened the march with the words: “This action is all the more important because it calls on every city to feel involved in the construction of peace, which can't be the responsibility of those in power alone.”

Over 100 students and teachers from Amatrice, the town which bore the brunt of the recent earthquake, were hosted in Perugia by the organizers as a gesture of solidarity and welcome.

Different religions and political parties were represented in the speeches at the start and conclusion of the march.

Perugian imam Abdel Qader said: “We hope that peace will conquer the world.”

The Catholic archbishop of the Umbrian city, Gualtiero Bassetti, spoke about the atrocities taking place in Syria, telling the marchers: “Indifference is to participate in the massacres and bombardment of Aleppo, without taking the responsibility of saying 'enough'.”

Representatives of trade union CGIL at the march.

Marchers arrive at the Basilica di San Francesco in Assisi.