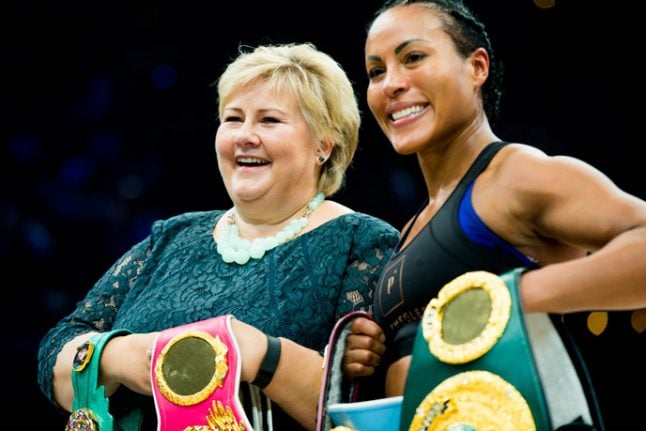 Solberg was criticized by some for celebrating Brækhus's victory. Photo: Vegard Wivestad Grøtt / NTB scanpix
But the PM has come under fire from critics who say she was a bit too happy in the ring after pro boxer Cecilia Brækhus battered her opponent Ann Sophia Mathis in the first round before winning by TKO in the early seconds of round number two.

“Embarrassing, tragic and tasteless that Norway’s government is proud of this. And when the prime minister stands in the ring afterwards and celebrates three minutes that ended with an opponent beaten bloody, it's just embarrassing,” the former Conservative mayor of Kristiansand, Per Sigurd Sørensen, said according to Dagbladet.
Sørensen’s comments were just one of many to knock Solberg’s celebration in the Oslo boxing ring.
But the PM has hit back at her detractors.
“I understand that we may have different views on professional boxing and boxing as a sport. But bringing professional boxing back to Norway is something Conservatives have worked for 25 years. I think it would have been much stranger had I stayed away from the event,” Solberg told NRK.
Removing the national ban on professional boxing was one of the current government’s priorities after the elections three years ago.
Culture Minister Linda Hofstad Helleland joined Solberg in cheering ringside at the bout. She said she couldn’t understand why the return of boxing shouldn’t be celebrated, considering the decades-long political struggle behind it.
Helleland emphasized that she stood by her decision to attend the match and noted that she “cheers at many other sporting events.”
“Saturday was also confirmation that we have been successful and now have a regulatory framework in line with many other countries,” she said.
Christian Democratic Party leader Knut Arild Hareide is among those who opposed repealing the boxing ban. He says that health risks associated with the sport are so great that Norway was right to ban it for 35 years.
“If you are part of a government that believes that this is a step in the right direction, I think it's fine to celebrate it. But I think it is a step in the wrong direction,” Hareide said about the game.
Several media and social commentators were very critical of Solberg’s presence in the ring after Brækhus’s TKO.
“It is extremely disturbing to see government figures rejoice over a woman getting such hard blows to the head that she could not continue,” Sven Egil Omdal wrote on Facebook.
“I can certainly fill the role of the politically correct when [I see] the prime minister and culture minister enthused that one woman has beaten another bloody,” Jan Arild Snoen wrote on Twitter.
Brækhus’s victory over Mathis improved her record to 29-0 and was watched by over one million viewers on Norway's TV3. The 35-year-old Norwegian is widely considered the world’s best female boxer and holds the welterweight title in the WBA, WBC, IBF, and WBO.