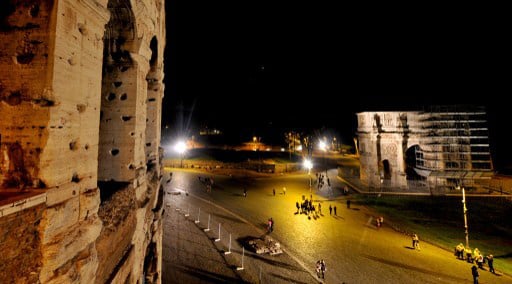 The brutal attack took place not far from the Colosseum on Sunday night. Photo: Tiziana Fabi/AFP

The announcement comes just 24 hours after police said they had arrested the suspected rapist – whom they had identified using CCTV footage from the bar.

A 49-year-old Australian woman was beaten, raped and robbed on Sunday night in the park, after spending the evening at a bar near Termini train station.

She was reportedly unable to remember the rape, but recalled being punched in the face and having her mobile phone and purse stolen. Police were able to return the money following the arrest of the 40-year-old man, who has been charged with sexual assault, robbery and bodily harm.

The Australian had been visiting the Italian capital for a study trip and was due to leave for Paris on Tuesday, Italian media reported, however she is expected to stay in the hospital for up to a month.

A passer-by came to her aid near the Colle Oppio, and took the woman to the San Giovanni hospital, where she is recovering from concussion and injuries to her face.

“Thanks to the police for the arrest of the rapist. Rome doesn't forget the victim's pain. Violence against women is unacceptable,” Rome's mayor Virginia Raggi wrote on Twitter.

This was the second brutal attack on a foreigner in Rome in two weeks; on Monday, Rome police arrested three people for the rape and beating of another woman, a 48-year-old Brazilian.

That attack took place on September 25th near the Tuscolana train station, when the woman was reportedly kidnapped by two men and a woman, who beat her, tied her up and raped her.

She passed out from the violence but was able to escape while her attackers were sleeping, and went to hospital where she reported the rape. Two men, aged 27 and 31, and a woman were arrested on Monday evening in connection with the attack, Rai News reported.

Photos and video taken by Rome residents on Wednesday afternoon show thick clouds of smoke, with the fire visible from the western side of the city’s ring road, or GRA (Grande Raccordo Anulare).

Firefighters are working to contain the blaze, which is reportedly spreading in the area between the major roads Via Aurelia and Via di Casalotti.

A mother and her baby were taken to hospital to be treated for smoke inhalation while 35 others were treated at the scene, according to local news reports.

Several homes and a summer camp have so far been evacuated, according to reports.

The fire brigade said in a tweet that several teams were at the scene of the explosions.

Firefighters said the blaze was becoming less intense at around 5pm on Monday, but that it was still spreading due to high winds.

A prolonged heatwave and a severe drought have caused extremely dry conditions across much of Italy, including Lazio, the region around Rome.

This story is being updated…