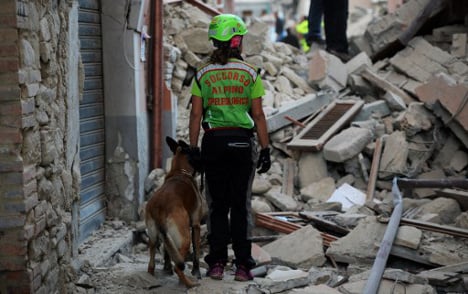 When news spread of the devastating earthquake in central Italy on August 24th, thousands of people across the country and further afield wanted to know how they could help.

From restaurants donating money from the sales of Amatrice's famous pasta sauce, to museums nationwide offering their takings to the affected towns, there were countless examples of kindness – but some have been quick to take advantage of the disaster.

Italian finance police in Rieti said on Sunday that they had unmasked two fake fundraising initiatives.

In one case, fraudsters were selling bracelets with Amatrice's coat of arms and city colours, saying “the entire proceeds from September's sales will be donated to the city of Amatrice”. Each bracelet cost €29 plus a further €6 for postage.

The second scam involved collection envelopes being sent to people asking for donations to help rebuilt a nursery for the children of Amatrice.

Neither scheme had been authorized by the city, and there was no indication that any money donated would actually be given to the affected towns.

Last month, the Italian fraud squad discovered a supposed non-profit association selling t-shirts for €20 through an online shop for customized t-shirts, and promising to send the money to the local council in Amatrice; this too turned out to be a scam.

The majority of the 291 people who died in the 6.2 magnitude earthquake were from Amatrice. Directly after the quake, the town's Mayor Sergio Pirozzi declared that “our town does not exist anymore.”

Since then, he has vowed to stay and help rebuild.

Police appealed to the public to make sure that any donations are made through official channels, and to report anything suspicious.