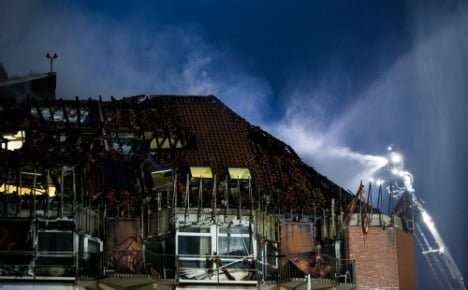 The fire in Bochum. Photo: DPA

A further 16 people were injured in the blaze, six of them are in a critical condition, after the fire broke out in a bedroom in the Bergmannsheil University Hospital.

The fire broke out in a patient’s room and quickly spread through the clinic, which has space for 650 patients, making it one of the largest hospitals in the Ruhr region, a densely populated area in North Rhine-Westphalia.

“The fire is still not under control,” a fire services spokesperson said on Friday morning, adding that it could take several hours before the blaze is calmed.

Around 200 fire crew were called into battle the flames, with the local services relying on help from the colleagues in other parts of the Ruhr region.

Residents of the surrounding neighbourhood have been advised to close their windows to prevent smoke entering their houses.

Eyewitnesses reported that windows and furniture were completely melted by the heat of the blaze. Meanwhile pictures from the scene show that at least one of the upper floors of the building has been completely gutted.

The cause of the fire, which broke out at around 2.30am, has yet to be identified.

Some 180 patients were in the hospital when the fire broke out, 100 of whom were released early. The remaining 80 were rehoused in other premises.

“The hospital is taking in no further patients. Operations have been shut down until further notice,” a fire services spokesperson said.