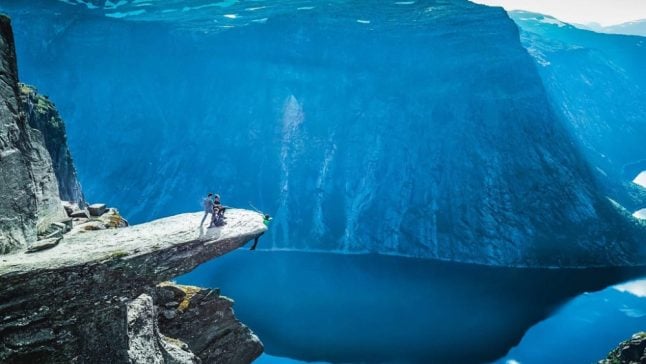 Swedish tourist Sarah Persson said the stunt was viewed by several other climbers. Photo: Sarah Persson
Last week, Swedish tourist Sarah Persson saw a group of climbers flirting with death in the quest for a perfect selfie.
The climbers, who turned out to be British tourists, used straps to help one man dangle from Trolltunga as he took his photo with a selfie stick.
Persson told The Local that even though the Brits “looked like they knew what they were doing”, she couldn’t believe that anyone would pull such a stunt from the famous promontory that juts out 700m above Ringedalsvatnet, a lake three hours west of Bergen.

See also: Tourist falls to death at Trolltunga photo shoot
“I came up to Trolltunga and saw the guys pulling their stunt and first l just put up my camera and took the shot,” she said. “No normal person would put themselves in that situation with no experience.”
A tour guide with the company Trolltunga Active, who gives hikers advice as part of a collaboration with local authorities, was leading a group up to Trolltunga and also witnessed the British tourists in the act of rigging themselves in order to snap the selfie.
The head of the company, Jostein Soldal, told broadcaster NRK that the tour guide attempted to stop them.
“The guide advised them against doing it but they told him that they had seen others who had done similar things. The guide went down again with his group before something bad happened, but later we discovered this photo,” Soldal said in reference to Persson’s shot.
“It’s idiotic behaviour. You can fall and die; it’s that simple,” Soldal said.
Persson told The Local that others at Trolltunga could hardly believe their eyes.
“Everyone around was silent as they watched and a few were taking pictures themselves,” she said. “I would never try something like that.”
See also: Norway climber slammed for Trolltunga stunt
The incident was hardly the first time that Trolltunga has attracted dangerous behaviour. In early August, Norwegian climber Magnus Midtbø was roundly criticized for posting a photo to Instagram in which he was hanging from the edge of the rock. Local authorities worried that the stunt risked encouraging others without Midtbø’s skills to risk their lives.
Soldal had the same concern about the latest stunt.
“It clearly has a copycat effect. These Brits said themselves that they had seen others do similar things,” he told NRK.
He said a complete change in attitudes is in order now that Trolltunga has become so popular amongst tourists, many of whom make the trek woefully unprepared and force rescue services to come to their aid.
“We need to change attitudes among tourists so that they do not accept this kind of behaviour. People need to tell each other that such things are not okay,” Soldal said.