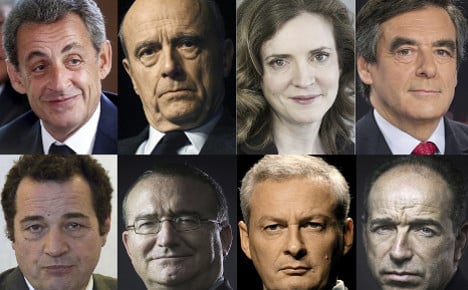 The stakes are high with polls showing that the winner of a duel between the two leading Republicans party candidates, Sarkozy and ex-PM Alain Juppe, would be clear favourite to win the election next May.

The other candidates vying to run for the Elysée are: Bruno Le Maire, who aged, 46-years-old is the youngest candidate, Francois Fillion, the former Prime Minister under Sarkozy, Nathalie Kosciusko-Morizet, the only female candidate in the line-up, Jean-François Copé a former party chief and Jean-Fréderic Poisson the president of the Christian Democrats party. The candidacy of Herve Mariton was not put forward as had initially been expected.

Once the eight candidates are named on Wednesday, the party and its centrist allies will then hold two rounds of voting to select their nominee on November 20 and 27.

National identity and Islam have emerged as key themes in the French centre-right contest, which has echoes of US Republican nominee Donald Trump's campaign for the White House.

Sarkozy is a brash right-winger and a divisive figure in French politics, while ex-prime minister and Bordeaux mayor Alain Juppe has styled himself as a unifying force.

“The candidates all agree on the economy,” Thomas Guenole, a political scientist and author of a book on Sarkozy's comeback said, referring to their consensus on cutting taxes and relaxing France's 35-hour working week.

“The only issues on which they create divisions are the four Is: Islam, identity, immigration, insecurity,” he said.

President Francois Hollande is yet to confirm if he will stand for re-election as the Socialist party's candidate in a bid to defy his
historically low approval ratings.

On the far-right, the National Front is prepared for battle, with its leader Marine Le Pen widely forecast to win the first round of voting in April and then fail in the second round against a mainstream candidate.

Juppé, 71, France's most popular politician, has been the favourite to emerge victorious from the start, but Sarkozy has nearly closed the gap with hardline proposals designed to woo voters reeling from a string of jihadist attacks.

The 61-year-old politician, who led France from 2007 to 2012, has vowed a “merciless” fight against the Islamist extremists who have killed 238 people nationwide since January 2015.

Declaring French identity to be under attack, he has declared war on the Islamic burkini swimsuit, the wearing of the Muslim headscarf in universities and other practices he sees as “un-French”.

“If you want to become French, you speak French, you live like the French. We will no longer settle for integration that does not work, we will require assimilation,” he told a rally on Monday.

'Fuel on the fire'

Juppe, a moderate who served two years as premier under Jacques Chirac and also was foreign minister under Sarkozy, has taken the opposite approach.

Accusing Sarkozy of “pouring fuel on the fire” with his calls for a state ban on the burkini, Juppe has tried to sell voters on what he sees as a “happy”, secure French identity.

Vowing to knit together a fractured nation, he has promised to “reach out” to the vast majority of Muslims who adhere to France's strict secular values.

Juppe has undergone a radical makeover from the grey technocrat who spent years in the political desert over a fake jobs scandal at Paris City Hall in the 1990s to benign elder statesman.

He has repeatedly made overtures to centrists as well as to leftists, who can vote in the primary if they pay two euros and sign a charter declaring they adhere to centrist or conservative values. For Jerome Fourquet of Ifop pollsters, the choice between “a war chief and someone who is wiser, more reassuring and brings people together” will come down to whether the French believe the country is, as Sarkozy says, “at war”.

A Harris Interactive poll last week predicted a tie between the two in the first round of the primary, with Juppe going on to win the run-off a week later by 52 percent to Sarkozy's 48 percent.

Among their other rivals are Sarkozy's former prime minister Francois Fillon, his former agriculture minister Bruno Le Maire and Nathalie Kosciusko-Morizet, who made a failed bid for Paris mayor.

For Fourquet “the ideological centre of gravity of the right is closer to Nicolas Sarkozy's positions than those of Alain Juppe.”

But Sarkozy is also hobbled by his legacy, seen as underwhelming economically and he is disliked by a majority of French people.

Fourquet warned of a possible bid by leftist and centrist voters to block his return by voting in the primary for Juppe.

Their calculation, he said, could be: “If we don't get involved we could be forced to elect him (Sarkozy) in six months' time” to prevent a National Front presidency under Le Pen.