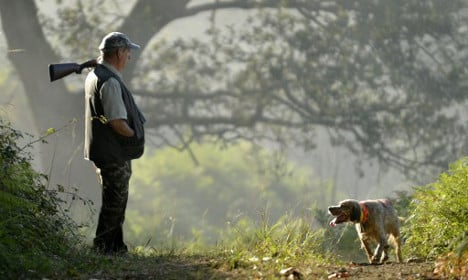 All photos: AFP
The hunting season started in southern France in September.
Here's what you need to know.
1. A staggered start
While most of the south of France hit the fields on September 11th, the rest of the country had had to wait until either the 18th or the 25th.
This is because the dates are chosen by the local department's prefect.
To see a full list of when you can hunt (or indeed, avoid the hunting fields) then click here. 2. Different game on different days
Hunters aren't simply allowed to head out and start shooting at anything they can see.
Exactly what can be hunted can change from department to department, and some areas will prevent hunting of some particular species at some particular times.
For example, hunting for birds is typically allowed for a much shorter time than for big game.
Check with your department on this interactive map to find what your local prefect has decided for you.
3. You'll need permission
Not just anyone can get out there and start shooting game. France has strict hunting laws, and you're going to need a permit (known as a permis de chasser).
This has to be valid, and you have to have paid the latest fees (known as redevance cynégétique).
These run from €223.64 for an annual pass to €17 for a three-day pass.
4. A dangerous time to be out walking
There has been a long line of accidental fatalities that have come with hunting in France, most recently this weekend when a 55-year-old was shot dead in the Dordogne.
Some accidents are tragic, some freakish, and many involving shooting at people who have been mistaken for animals.
These include an elderly man shooting walkers after mistaking them for pheasants, and a man killing his own son after mistaking him for a wild boar. 5. Controversial hunting
The Association for the Protection of Wild Animals (ASPAS) has long been campaigning for a ban on hunting on Sundays.
Speaking to The Local previously, Pierre Athanaze, the head of ASPAS, said the laws needed to be changed in France to prevent more deaths.
“France is the only country in Europe where people can hunt every day, which is why we are the country in Europe with the most accidents.
“Hunting needs to be stopped on Sundays, because this is the most dangerous day. There are more and more people heading out into the countryside on a Sunday, whether it's walking, mountain biking or collecting mushrooms. We want an end to it,” he said.
6. First Sunday hunting ban rolled out
This season sees the first time that such a Sunday ban has actually been implemented, and it will be tested in parts of Haute-Savoie in eastern France.
In fact, so serious are authorities about people's safety during the hunting season that they have launched an app to let people know when and where to avoid going for walks in the wild.
The 2016-2017 hunting season ends in February