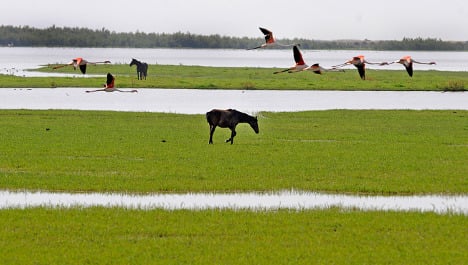 It's one of Europe's most important wetland reserves, a World Heritage site full of lagoons, woodlands, pristine beaches and dunes, home to more than 4,000 species including the endangered Iberian lynx.

But the WWF warned on Thursday that the Doñana wetlands on Spain's southern coast, which also act as a crucial refuge for Europe's Africa-bound migratory birds, now only receive a fifth of the water they need, in part due to illegal farming.

In a report, the environmental group added that the site faces further damage with nearby mining, gas and dredging activities that could potentially see UNESCO put it on its endangered list next year.

“When you start piling all sorts of problems and threats onto an ecosystem, it may be that you wake up one day and the site is no longer what it was, and that's what is happening with Doñana ,” Juan Carlos del Olmo, head of WWF Spain, told AFP.

The Doñana wetland complex in the region of Andalusia spans more than 100,000 hectares (250,000 acres), an area bigger than Singapore.

However only part of the complex has the ultra-protected World Heritage and national park status, and the rest is a natural reserve where activities such as sustainable agriculture are allowed.

A portion of the reserve and the area outside produces 70 percent of all strawberries grown in Spain, and many depend on this for their livelihoods, according to the WWF.

But the environmental group says 1,000 illegal wells and 3,000 hectares of illicit farms have also sprung up over the years.

This, coupled with river modifications to improve navigation and agriculture, has made Doñana very thirsty.

Other problems include the planned dredging of the Guadalquivir river to make it deeper and allow cargo and cruise ships to get to the port of Sevilla further upstream.

The project, which environmentalists fear will disturb the river's ecosystem and attract more salt water into the wetlands, was halted by Spain's Supreme Court but del Olmo says the government has yet to cancel it.

Spectre of mine disaster

Adding to this, utility company Gas Natural Fenosa has been given permission to use depleted natural gas reservoirs in the area as underground storage sites for later consumption, which will involve the building of yet more pipelines in a fragile area.

The company points out that similar projects have been safely carried out elsewhere in the world, some of them in protected areas such as France's Luberon natural park.

Company spokesman Luis Ignacio Alonso said the project was designed to ensure “minimal impact on the environment”,adding the pipelines follow existing paths and fire lanes and that work stops in specific areas during mating season.

But the WWF also pointed to the re-opening of the nearby Aznalcollar mine that caused one of Spain's worst ecological disasters in 1998 when a dam burst and released toxic waste into a river, only narrowly avoiding the wetlands.

“The waste released from the dam was equivalent to the contents of 2,000 Olympic-sized swimming pools, and after the spill around 30,000 kilograms of dead fish were found,” the group said.

In its report, the WWF called for a number of measures, urging for instance the government to cancel the planned dredging of the Guadalquivir river and close illegal farming fields.

Spain's environment ministry responded that every project was submitted to a “rigorous” impact assessment, and pointed to the wetlands' inclusion in the International Union for the Conservation of Nature's green list, which recognizes good management of natural areas.

It added that it was working towards “resolving the problem of the lack of water”.