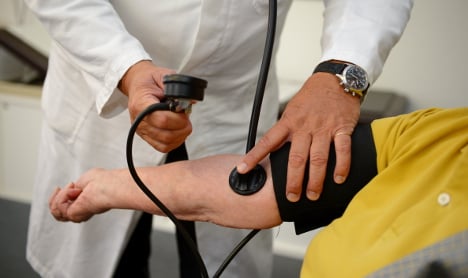 “We don’t have too few doctors, but actually too much contact with doctors,” KKH CEO Ingo Kailuweit told Bild on Tuesday.

“Half of all doctor visits are unnecessary.”

The OECD’s Health Statistics report for this year showed that Germans went to the doctor on average more than 18 times in 2008, while another OECD report showed that Germans visited the doctor about ten times each in 2013. This made Germans one of the top ten countries for doctors’ consultations in the world that year.

And Kailuweit also said that it’s not necessarily the patients’ fault: general practitioners “keep their patients too long”, for fear of transferring them elsewhere. Therefore patients might consult multiple doctors if they feel they haven’t received the treatment they wanted.

“Where are the facts behind the KKH's claims?” Gassen wrote in a statement.

“Health insurance companies themselves drive up the number of doctors' visits, for example, by aggressively promoting to their clients that they can get a second opinion.

“Qualified doctors worry every day about the patients at their practices, under difficult circumstances. Every tenth service is on average not compensated. So there is absolutely no interest in unnecessarily increasing the number of patient visits.”

The chair of the board of the German Foundation for Patient Protection, Eugen Brysch, said that the KKH leader’s statements were “hot air”.