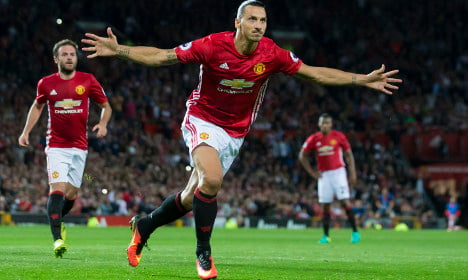 Ibrahimovic after scoring against Southampton in August. Photo: Jon Super/AP/TT

Much of the build-up has centred on the intensive rivalry between United manager Jose Mourinho and City counterpart Pep Guardiola.

However, a further twist comes from the fact that Ibrahimovic, who previously played for Mourinho at Inter Milan, had a difficult spell under Guardiola at Barcelona, with the Swedish striker once saying the Catalan was a great coach but “not a (great) man”.

Now Ibrahimovic, famed for his outstanding self-confidence as well as his fine football, is relishing the prospect of taking part in another major club rivalry.

“For me, the big games are the ones that trigger you,” he told MUTV, United's in-house television station.

“They're the games everyone speaks about. I have played in many derby games, I've played in El Clásico (Real Madrid-Barcelona), the Milan derby, Ajax and Feyenoord, which was the big one there (in the Netherlands), and PSG-Marseille (in France).”

“I have played in all of them, the only one I missed was this one. This is coming on Saturday and I am very well prepared, confident and focused, and there is a lot of hard work behind that,”

“We are prepared and we are ready. We just wait for the game now.”

Ibrahimovic was among a small group of United players not to have taken part in international football during the past two weeks after retiring from Sweden duty following Euro 2016.

The striker added to the already tense atmosphere surrounding the match by sending new City goalkeeper Claudio Bravo a training kit, with the warning “you're going to need it”.

But for Ibrahimovic all the talk around the game is nothing new.

“People are talking about it and build it up and the media are discussing the situations from the red side and the light-blue side and all the investments and transfers and the new coaches,” he said. “It's a normal build-up.”

“For me, I've been through it and I know how it is. We are ready. Everyone came back from the national team break and we are back in action. The team is focused.”