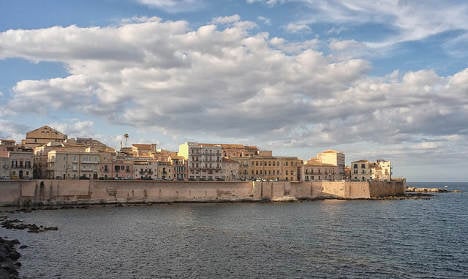 Siracusa, where the time cheats worked for the public authorities. Photo: Daniel Enchev/Flickr

One month, the rate of absenteeism shot up to 85 percent, finance police said.

Investigators observed 6,800 hours of video footage and data from GPS devices installed in employees' cars – which revealed that workers at the local authority in Siracusa, Sicily were clocking in to work and then leaving to do more leisurely tasks.

Hidden surveillance cameras were also used to track the workers; some of the footage released by police can be seen in the video below.

The data showed employees returning home after filling in their time-sheet, as well as catching up on personal tasks such as visiting the doctor or public offices, and gardening – sometimes for payment, Il Corriere reported. Shopping was a particularly popular alternative to work, with workers observed at the local markets and shopping centres.

The investigation began in January 2015 and will be one of the first times Italy's new, tougher laws against absenteeism will be put into practice.

“29 employees caught in the act in Siracusa. The #RiformaPa will be applied: rapid termination of contracts, under the watch of honest employees,” Marianna Madia, Italy's Minister for Simplification and Public Administration, announced on Twitter on Wednesday.

Those who have been caught cheating the timesheet system will be charged with fraud, while others are also under investigation for filling in time-stamps for absent colleagues.

The new laws to tackle the phenomenon of absenteeism were brought in in July, following government data which suggested that only a tiny proportion of those found guilty of cheating lose their jobs. As well as cracking down on absent employees, the laws included clauses targeting employers who allow the practice.

Italy's widespread problem of time clock dodgers hit the front pages in October last year after 35 people were arrested in San Remo in the northwest of the country and 195 people were placed under investigation for absenteeism.

Traffic cop Alberto Muraglia, 53, who lived in the same building he works in, was secretly filmed by financial police as he clocked in in his underwear before apparently going back to bed. His wife was also filmed clocking in some days on his behalf, in her nightie. Others were caught on camera clocking in and then going canoeing, shopping or out with friends.

In January, nine staff at a museum in Rome were suspended after being caught swindling the time management system, some of them going to the betting shop on the clock.

In late July,  an Italian policeman was placed under house arrest after he was caught clocking-in before going fishing with friends. While the new laws seem to have been effective in bringing such cases to light, in Naples two public sector workers under investigation for fraud were filmed with cardboard boxes on their heads while clocking in, in an apparent attempt to avoid being caught.