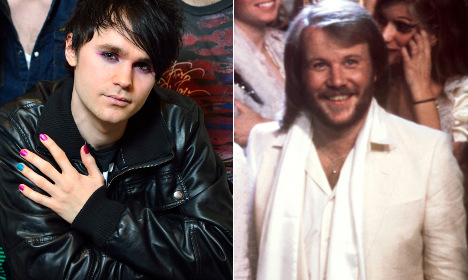 Sweden's Idol is always a closely watched and closely fought battle and has helped launched the careers of Swedish global stars including Eurovision winners Måns Zelmerlöw and Loreen.

Charlie Grönvall is one of the contestants in the latest series on TV4. But the artist has bigger shoes to fill than most, being the son of Peter Grönvall, whose dad is none other than Benny Andersson of Abba fame.

His mum is artist Nanne Grönvall, who has performed on Melodifestivalen, Sweden's pre-Eurovision contest. So has Charlie himself, in 2014 with his band Little Great Things, so he is no stranger to the stage, but the 26-year-old was still visibly nervous when he took his place in front of the no-nonsense Idol judges.

“Let's not focus on his parents, let's listen to Charlie,” ordered judge Fredrik Kempe in the video below, which aired in Sweden on Monday evening.

Grönvall in the end had little reason to be nervous. The clip shows how the jury instantly sent him through to the next stage of the competition after listening to his version of Pink ballad 'Just Give Me A Reason'.

“You are awesome! You are crazy cool. Everything about you is very [sic] unique and that is amazing,” exclaimed excited judge Nikki Amini.

“You have an artist's aura, your voice has its own ID, you immediately hear that it's you,” elaborated her colleague, Swedish-American producer Quincy Jones III, who has some interesting family ties of his own.

Grönvall himself was pleased afterwards.

“I have always dreamed of doing Idol, but this year is the first time I feel like I believe in my ability to do this, so it was worth a try,” he described his feelings. “It feels good now. It was fun.”