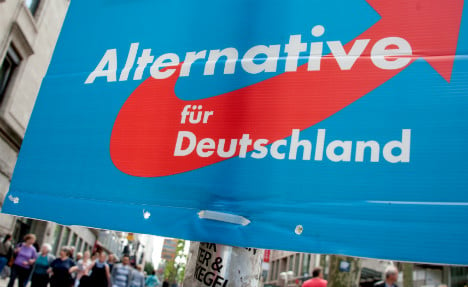 The fight broke out when masked left-wing demonstrators turned up for a protest outside the pub where AfD supporters were celebrating the fact that the party had come second in state elections in Mecklenburg-Western Pomerania, police report.

Accounts of how the violence broke out vary, with AfD supporters blaming the demonstrators.

Chris Ares, a rapper from the far-right scene, claimed in a Facebook post that 30 demonstrators armed with pepper spray and batons turned up outside the pub, Die Welt reports.

Ares’ post, which has now been deleted, alleges that the demonstrators fled after AfD supporters “fought with heart”.

He also appeared to call the left-wing demonstrators out for another fight.

“You know where to find us. You can come with 100 people against three of us, we are men of honour, we stand or we die,” he wrote.

But several witness accounts of the incident build a very different picture, reporting that a group of men waited for the demonstration to take place and then targeted participants.

A member of the press who was at the event told The Local that three men from the AfD party attacked demonstrators and journalists, with Ares “running madly into the crowd attacking everything in front of him.”

The journalist said she did not see any left-wing demonstrators carrying weapons.

All three men are reportedly linked to right-wing extremist groups and appear regularly at AfD events in Bavaria.

Photographic evidence also shows one AfD supporter, reportedly Ares, aiming a kick at a journalist. Other media reports suggest a journalist was punched in the face.

The Huffington Post spoke to two journalists who reported Ares kicking, punching and spitting at journalists while shouting homophobic slurs.

A Facebook group associated with the left-wing activist group Antifa claims the AfD supporters “brutally attacked demonstrators and journalists with punches and kicks.”

The AfD, which has advocated shooting at people who illegally cross the German border and seeks to ban minarets in Germany, has reached 14 percent approval in nationwide polls.