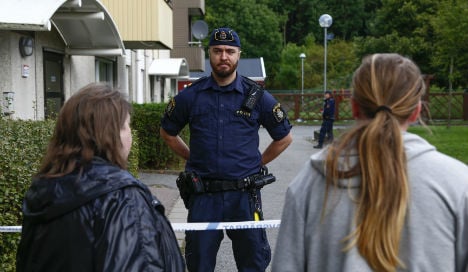 Angered is the second biggest of Sweden's Million Programme developments. Photo: fakatativa/Wikimedia Commons
“This seems to be an affair which has gone crazy,” Hans Lippens, a police spokesman, told the local Göteborgs Tidning newspaper.
A man was treated for gunshot wounds to the leg at 3am on Sunday morning. He told police he had been shot on Andra Långgatan, a popular street of bars and restaurants in central Gothenburg. Witnesses told police that there was a street brawl which ended abruptly after a shot was fired.
Later on that same morning, unidentified assailants opened fire with an automated weapon at an apartment building in Angered, a high-rise suburb with 60,000 inhabitants.
Police estimate that about 14 shots were fired, judging from the bullet holes found at the entrance to the property and around the bicycle garage, but have found no signs of blood, so the intended victim may have escaped unharmed.
Lippens said it was “too early to say” if the shootings were connected to the recent spike in rivalry between the city’s gangs, which saw a man shot dead on Friday night, and a grenade attack on a apartment last month that left an eight-year-old boy dead.
“In the area there are several people who are of interest to us, but none of them are connected to the address that was fired at,” he said.
Police in the city believe they have identified the man shot on Friday night at the city’s Frölunda Torg, but would not confirm media claims that he was the leader of one of the city’s most notorious gangs.
“His wounds are of the type that it’s not possible to safely say if he is the person we think he is. We can’t identify him visually so we’ve got to rely on DNA and fingerprints,” Lippens told TT newswire.
Url copied to clipboard!