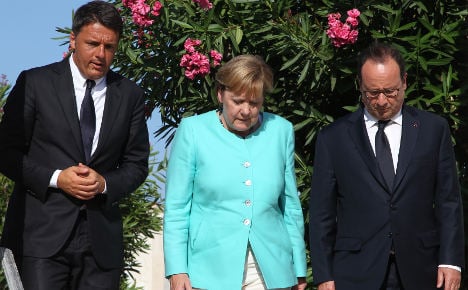 The tiny island of Ventotene, off the coast of Naples, was the location of choice for a recent mini-summit on the future of the EU between Italian, French and German leaders last week.

The island is symbolic because it was the place where the dream of a united Europe was born.

That dream was steered towards reality by Altiero Spinelli, a journalist and communist politician who was sentenced in 1927 to 16 years in jail for criticising the rise of the Italian dictator, Benito Mussolini.

In 1941, he was transferred to a prison for exiles on a nearby outcrop called Santo Stefano where, alongside fellow inmate Ernesto Rossi, he hatched plans, on cigarette paper, for “a free and united Europe”.

Altiero Spinelli wrote one of the founding texts of European integration. Photo: Wikicommons

The ‘Ventotene Manifesto’, which was smuggled to the continent by Ursula Hirschmann, a German anti-fascist activist, became one of the founding texts of European integration.

Seventy-five years on, Italy’s outward-looking Prime Minister Matteo Renzi is trying to revive the country’s historic role in shaping the EU, in what is no doubt the most challenging period in its history.

Determined to keep the project intact in the wake of the UK’s vote to leave, Renzi said he invited French President François Hollande and German Chancellor Angela Merkel to Ventotene, where Spinelli is buried, to lay the groundwork for a “different Europe…one that pays more attention to values and less to big finance”.

Ahead of a working dinner aboard the Italian aircraft carrier Giuseppe Garibaldi, the three leaders told journalists that they were on the same page.

Renzi insisted that Brexit did not mean the end of the EU, while Merkel recalled the project being born out of some of the “darkest moments” in European history.

Hollande called for a “new impulse”, saying that, faced with the growing division, the bloc needed to come together on the economy, defence and security, and ensuring jobs and education opportunities for young people.

Italy, France and Germany are now being described as the EU’s “big three” as they endeavour to find a new beginning for a project that will no longer include one of its strongest members – the UK.

And many are asking whether the trio have what it takes to turn the bloc around.

They face an intimidating list of challenges: the lacklustre economy, terrorist attacks, border controls and the refugee crisis, all of which are spurring the rise of populism.

“And I’m not sure these governments have the political strength to overcome them.”

The fundamental problem, he explained, was economics, with the persistent financial woes blighting the bloc giving rise to serious doubts about a project that includes members who are not economically equipped to be part of it.

“The question now is: how do we go forward? How do we grow borders, alongside commonsense?

“It’s no longer a question of whether we bring in more Eastern European countries. The very core of the EU has to decide whether it can find a way to integrate the economic system to such a point so as to make it function, otherwise it won’t work, making it much harder to work on things like common borders.”

The other divisive factor is the European single currency, which some point to as being the main culprit of the EU’s economic decline, as well as the German stance on fiscal policy.

“The euro is based on premises that aren’t the norm in other monetary areas,” Pavoncello added.

“Germany also has a very specific position as to what the EU must do in economic terms, which includes price stability and not instability, inflation and deficit.”

Such an approach means the amount of money countries like Italy pay in interest on public debt chokes any possibility for growth, he said.

In May, Renzi announced that Italy had been given “unprecedented” leeway from Brussels on its budget deficit rules for 2016, adding that the flexibility was “worth lots of money” for the country.

He has pledged to fight for a similar deal on the 2017 budget in an attempt to reboot an economy which stalled in the second quarter of this year.

“But the tension [within the EU] won’t be solved by letting Italy spend one percent more,” Pavoncello continued.

“The bigger tension involves the very structure of the EU and whether it is capable of working in a more integrated way as an economic area.”

Either way, Renzi, if he lasts beyond the autumn referendum on constitutional reform on which he has bet his leadership, has ensured Italy will wield influence over the EU's future direction.

Over the last two years, the 41-year-old Florentine has worked hard to earn Italy respect of its European neighbours, especially after the embarrassments of the Silvio Berlusconi era, winning praise from his counterparts as he ushered in much-needed reforms.

And with the UK now out in the cold, there is more room for Italy, whose influence was eroded by decades of political instability, to take a leading role in shaping the EU, according to Giovanni Orsina, a political science professor at Rome’s Luiss University.

Despite the anti-establishment Five Star Movement making huge strides in mayoral elections in June, and the threat that the party, the second biggest political force in the country, could sweep to victory in a general election, Orsina believes Renzi has what it takes to stymie populism.

“Renzi is less shiny than he was a year ago, but he seems capable of surfing the EU’s problems and populism – he is more capable than Hollande and some other leaders at coping with populist parties,” Orsina explained.

But with its banks teetering on the edge of collapse, a stalled economy, huge public debt and the looming referendum, many see Italy as Europe’s next disaster, providing an opportunity for populists.

For Pavoncello, member states lack the dynamism to deal with the challenges and avert the threat of populism and further fragmentation, making it difficult to keep the “dream” going.

“The question is: do you continue to create a situation whereby if there is a problem in one country, everyone steps in to help? I think there will come a point when the answer is ‘no’,” he said.

“The economics is the fundamental problem – if you can’t reinforce dynamism the populist parties will criticise.”

When Renzi chose Ventotene as the venue for this week's talks, it was not only a reminder of the European project's Italian origins, but of the brutal conflict that gave rise to it. For those willing the European project to turn itself around, the stakes could not be higher.

As Pavoncello puts it: “Once things break down there will be no assurances that the past won’t catch up with us again.”