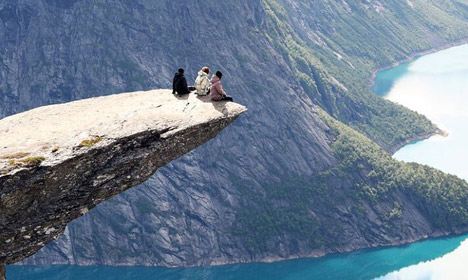 More people than ever want to visit Trolltunga, but not everyone is equipped for the journey. Photo: Kashif Pathan/Flickr
Late on Tuesday night, a pair of hikers came to the conclusion that they would not be able to successfully make the hike down from Trolltunga, one of Norway’s most popular attractions, before nightfall.
The foreign hikers were also not sufficiently outfitted with the proper hiking equipment.
But because the Red Cross has already been called out on so many rescue missions this summer, its resources have been stretched to the breaking point. Therefore, the organisation had to tell the hikers it couldn’t help.
“Because of the many recent rescue missions, the Red Cross did not have the manpower to send someone to Trolltunga,” police spokesman Jan-Tore Heggholmen told broadcaster NRK.
Emergency services have been called out to Trolltunga, which juts out 700m above Ringedalsvatnet, a lake three hours West of Bergen, ten times over the past nine days.
The foreign couple on Tuesday night successfully made contact with a cottage owner and were allowed to overnight on the mountain. Heggholmen said that the couple’s ability to secure shelter for the night led emergency services to decide that the situation wasn’t critical enough to warrant sending a crew.
He said that the couple was fine “but they’re going to get wet on the way down”.
In 2013, around 20,000 people make the trip to Trolltunga, which takes several hours to reach. This year it is expected that around 100,000 will visit the natural attraction.
However, as the repeated rescue operations have shown, not everyone who sets out on the journey is fit enough or well enough equipped to make the hike successfully.