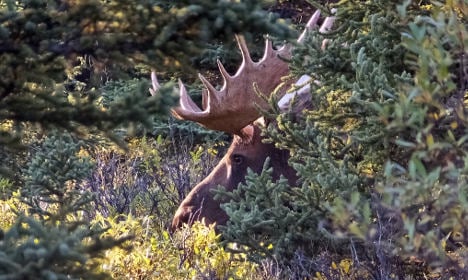 An annual inventory of grazing elk (officially called Äbin) shows that more than half of all pine trees in southern Sweden's Götaland area have suffered damage caused by elk nibbling on their trunks, according to the Swedish Forest Agency (Skogsstyrelsen)

“It's above all the Blekinge region sticking out. 28 percent of the pine trunks have been damaged this past winter and in total 77 percent of pine trunks have grazing damages,” the agency's wildlife expert Christer Kalén told agriculture magazine ATL.

“It's an emergency situation,” he added.

In central Sweden the peckish animals have got their teeth into around one in three pine trees.

“In the past things have looked better in northern Sweden, but that trend is broken. The damages are increasing there, too, and almost nine percent of the pine trunks had been grazed during the winter,” said Kalén.

Around 80,000-90,000 elk are killed annually in Sweden's elk hunt, which is set to kick off on September 5th this year. But shooting more of the animals alone will not necessarily solve the problem, say experts.

“The elk population has not increased, rather the opposite, but the damages are increasing. We have to shoot more elk and plant more pine trees,” said Daniel Ligné of the Swedish Hunters' Association.

“Nuisance wildlife management should be used to remove individuals with unwanted behaviour. But all elk eat pines, so that is not the right way to go either.”

READ ALSO: Is it an elk or a moose?