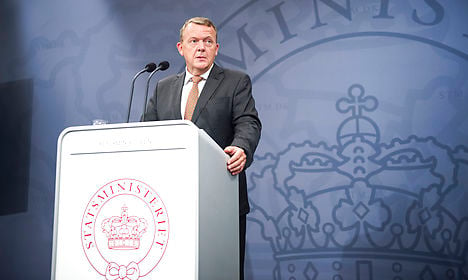 The immigration proposals were just one part of PM Lars Løkke Rasmussen's 2025 Plan. Photo: Ólafur Steinar Gestsson/Scanpix
Among the proposals that would be of particular interest to The Local’s readers are changes meant to make it harder for foreigners living in Denmark to obtain a permanent residence permit.
Saying “the government is working for Denmark to be open for those who can and will, but also to close the doors for those who can’t”, it announced plans to “tighten the rules further”.
The plans call for foreigners to first be able to obtain permanent residency after living in Denmark for eight years, as opposed to the current six. At the outset of 2016, that time period was just five years before it was increased as part of a comprehensive immigration bill.
Additionally, the government wants to further tighten the employment requirements so that foreigners will have to have been employed for 3.5 of the past four years when they apply for permanent residency. It’s currently required that foreigners have been employed for 2.5 of the past three years, but that too was changed as part of the January immigration bill. The previous rules called for employment for three of the past five years.
The government has tried to maintain an “incentive” for foreigners by saying that if they meet four supplementary conditions – displaying 'active citizenship' by participating in civic organizations or the passing of a citizenship test, steady employment for four of the past 4.5 years, an annual salary of 270,000 kroner for two years prior to application, or the completion of Danish 3 language courses – permanent residence can be achieved sooner.
It also wants to increase the incentive to leave the country, offering “increased support for the repatriation of foreigners who have a residence permit” in the form of financial payments to cover such things as health care and education in a foreigner's home country.
'Emergency brake' for asylum
The majority of the government’s immigration proposals have to do with asylum, which is currently at its lowest level since this year. Denmark has thus far received roughly 4,700 asylum seekers, a far cry from the 21,000 who came last year.
Nevertheless, the government entitled its plan ‘A Stronger Denmark: Control of the Refugee Flow’ and promised a number of initiatives to bring the number down even further. It said it expects 10,000 asylum seekers by the end of 2016, though that would require more to come in the next four months than in the previous eight.
“Even though the number of asylum seekers is lower this year than we initially expected, 10,000 asylum seekers is still too many and we want the number to go further down. At the same time, we need to be ready to handle an acute pressure if holes again emerge in Europe’s borders,” Integration Minister Inger Støjberg said in a press release.
The government wants to lay the groundwork for an “emergency brake” that can be initiated to reject asylum seekers at the border under “a crisis situation”. It also calls for tougher requirements to qualify for the controversial 'integration benefit' introduced last year.
The government also says it will redistribute one billion kroner of money saved through asylum restrictions at home to countries like Syria, Turkey, Lebanon and Jordan.
“The government's tight immigration policy and the EU's agreement with Turkey has led to significantly fewer asylum seekers in Denmark. This means that we can now move more money to helping refugees in the world's hotspots rather than asylum seekers in Brande and Brønderslev,” Foreign Minister Kristian Jensen said in a separate press release.
The government’s full immigration plans can be found here (in Danish).