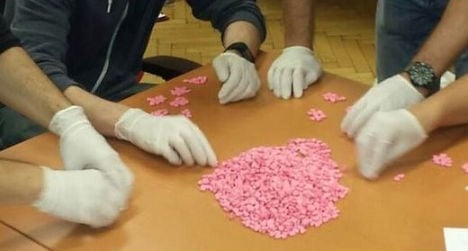 In total 33,000 people were reported for drug offences in 2015, the highest number in ten years according to the Federal Office for Crime (BK).

Over 20 kilograms of narcotics were seized in total, with cocaine seeing a significant increase from 31 kilos in 2014 to 120 kilos in 2015.

Authorities say they are “continuing to pay special attention to the development of the transport of drugs through the Balkans” and collaborating with partner countries to crack down on the trade.

As well as the traditional drug smuggling, including of heroin and opiates from Afghanistan and herbal cannabis from Albania and cannabis resin from Morocco, there has also been an increase in drug criminality on the darknet.

As a result, officials say they are strengthening collaboration with financial and customs authorities to tackle narcotics ordered online and sent via the post.

In response to the data published by the BK, the Hanf-Institut – who promote the use of cannabis as a medicine and relaxant – say the authorities are wrongly focusing on “small fry”.

Head of the Hanf-Instituts Toni Straka said that they are particularly critical of the focus on cannabis offences and the high costs associated with prosecuting a cannabis user.

They claim the Austrian state is spending over €400 million – or on average €15,000 per case – to prosecute “just victimless ‘criminals’”.